There’s a great white shark heading toward Great Britain and the UK’s version of Quint says he’s going to stop... 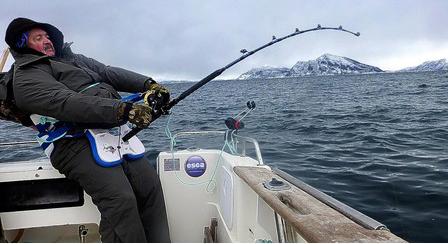 There’s a great white shark heading toward Great Britain and the UK’s version of Quint says he’s going to stop it.

West Country resident Zyg Gregorek is hailed by many as the world’s greatest fisherman, a title he received in 2007 after becoming the first person to catch all 27 species in the three “royal slams” set by the International Game Fish Association (IGFA). Mr. Gregorek’s notoriety grew in 2012 when he became the first recreational angler in history to catch five different species over 1,000 pounds.

The 70-year-old says he will put this wealth of fishing knowledge to the test when he catches Lydia, the 15-foot great white that U.S. scientists are tracking via a GPS tag. The scientists say the shark is heading toward British waters. Gregorek says he won’t harm the fish, as great whites are a protected species. His mission is to weigh it and move it into safer waters before releasing.

Gregorek told the Western Daily Press: “I’ve caught Great White Sharks in the past – they’re very strong and are good fighters so I’d expect to battle with it for a few hours before catching it. I know I’m no spring chicken but I’m confident I could take it on – it would be like fighting a miniature bull but I’ve got all the experience behind me to do it.”

Gregorek’s plan is to bait Lydia is with a massive chum slick then hook into her with 130-pound line with a 50-pound clasp. Gregorek said he will fight Lydia standing as there are no fighting chairs on his 20ft catamaran. The British version of Quint says, “Great White’s aren’t the toughest to capture so I’d feel quite confident – Tiger Sharks seem to be the most difficult to catch.”

Gregorek has landed two great whites in his career. The one he caught off the coast of South Africa in 2000 weighed 1,300 pounds.

Can Gregorek land Lydia or is this all a fish story?