Yesterday we showed you some of the cutest 10-month-old cougar kitties ever, ripping a deer carcass to shreds. Today we’re... 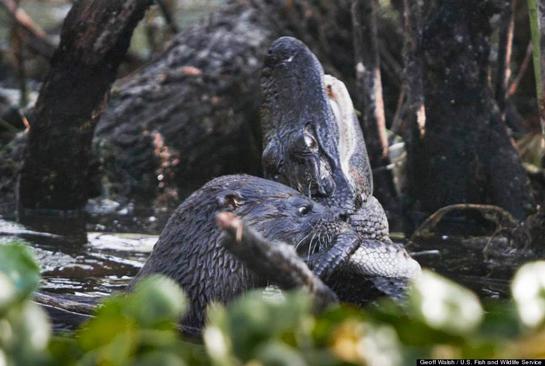 Yesterday we showed you some of the cutest 10-month-old cougar kitties ever, ripping a deer carcass to shreds.

Today we’re proud to post a cute fuzzy otter playing vampire on the back of an alligator.

That’s right. We have photos of an otter tearing chucks out of North America’s top reptile.

The photos were taken in 2011 by Geoff Walsh in Florida’s Lake Woodruff National Wildlife Refuge but only made public this week via the U.S. Fish and Wildlife Service’s Facebook page earlier this week.

The caption on that site reads that the otter pulled the gator onto the bank and started eating it “as evidenced by crunching noises.”

Between the pythons and the otters it’s a wonder there’s any gators left in Florida at all!

What do you think? Would you have picked the alligator in this fight?