The giant 805-pound mako shark we posted about earlier this week looked like a shoo-in for the new world record,... 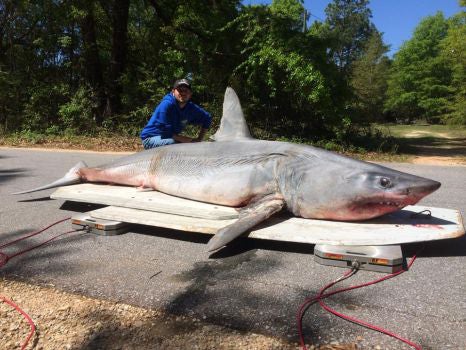 The giant 805-pound mako shark we posted about earlier this week looked like a shoo-in for the new world record, but now the catch is no longer eligible for the top spot in the International Land-Based Shark Fishing Association record books. After a group of anglers landed the 11-footer from the shore near Pensacola, Fla. on April 15, the monster shark was too exhausted from the hour-long struggle to swim away. So the three cousins hauled the fish home and prepared a community feast to feed nearly 250 people. As it turns out, that was a big mistake.

Beginning in 2012 the ILSFA stopped accepting record applications for sharks not released, the agency announced in a press release.

“With that said, our respect and support for angler’s rights including decisions to legally possess fish remains,” wrote cofounders Sean and Brooks Paxton.

Joey Polk worked together with his cousins Earnie Polk and Kenny Peterson to land the massive mako. After wrestling the shark to shore the trio tried to release it back into the ocean. They even waded chest deep and waited 15 additional minutes without success, according to a video interview with the anglers.

“I think it’s a bunch of bull, if that fish is not gonna swim off and not gonna make it, I’m not gonna let him die,” Joey Polk told the Houston Chronicle.

Polk has since protested the ILSFA’s policy. He is still communicating with the agency and hopes the ruling will be resolved in his favor. According to Earnie Polk, the three cousins tag and release nearly 98 percent of their catches, only keeping – and eating – the sharks unable to survive once released.

Earnie Polk also holds the current world record for the largest land-based mako, caught in 2009. The 674-pound catch is one of just two world-record sharks that were not released but still accepted prior to the recent rule changes. The Polks ate that shark too.