Centipede Claws Out of Snake’s Stomach

Photo by Arsovski et al Ecologica Montenegrina Mother Nature took the “fight-or-flight response” to new heights when she pitted this... 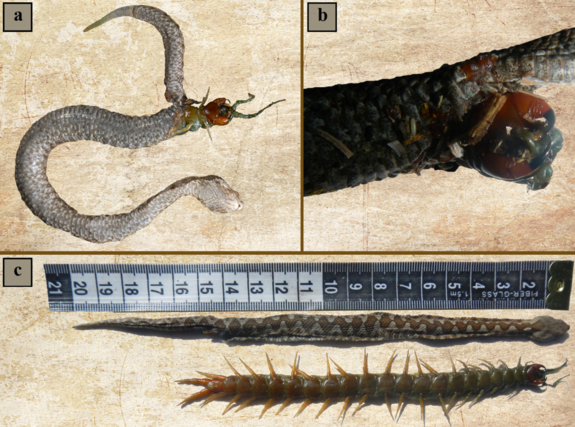 Mother Nature took the “fight-or-flight response” to new heights when she pitted this nose-horned viper against a centipede.

Researchers on a field study in Macedonia last year discovered the dead snake with a centipede sticking out from its belly. A dissection of the snake revealed that its internal organs were missing. Researchers believe the centipede might have still been alive at the time it was swallowed, and that it destroyed the snake’s organs while trying to claw its way back out, Livescience reports. A brief report of the incident was recently published in the journal Ecologica Montenegrina.

According to the researchers, nose-horned vipers have been know to successfully eat small mammals, lizards and birds — even centipedes. But this 6-inch centipede proved to be too large a meal for the 7.9-inch female snake.

Maybe the folks in Florida should take a cue from this death match and start breeding and feeding giant centipedes to the invasive burmese pythons — then again, maybe not.