Photo by WA Fisheries A great white shark roughly the size of a Chevy Suburban has been tagged off King... 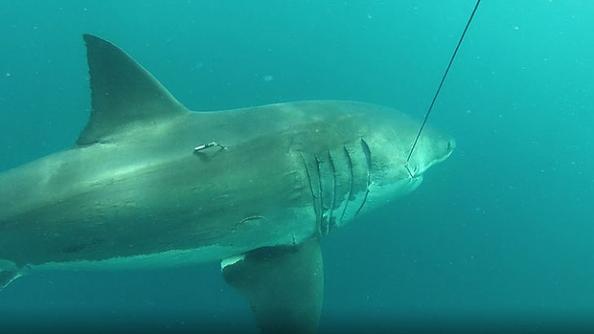 A great white shark roughly the size of a Chevy Suburban has been tagged off King George Sound, Australia.

The shark was measured 16.5 feet in length and weighed more than 3,500 pounds. This gargantuan size easily makes it one of the largest great white sharks ever tagged in the world.

It took Australian Fisheries staff almost three hours to subdue the shark once it was hooked off Mistaken Island on March 30. The shark was caught on a 14-16mm rope attached to 3mm cable hooked with a chunk of salmon in about 45 feet of water.

“This is very exciting and potentially a world first. It is something we have been striving for and it is great to prove we can handle an animal of that size,” Mark Kleeman, Shark Monitoring Network project manager, told WA Today. “Lots of juveniles have been tagged, but to have a fully-mature female and get 10 years of data out of it is a big thing for us.”

Once caught, the shark was turned upside down where it slipped into a sleep-like state known as “tonic immobility.” This allowed fisheries workers to attach the tag and release it unharmed. The entire process took about five minutes.