The Western Australian government killed 50 of the 172 sharks it caught in the past three months as part of... 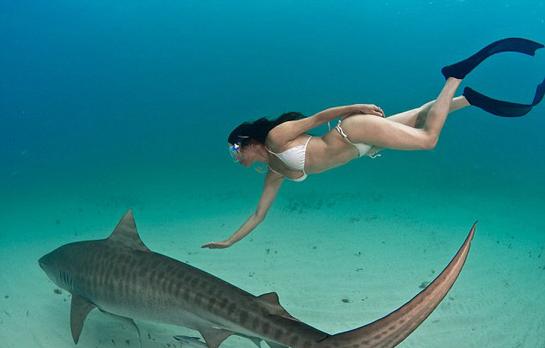 The Western Australian government killed 50 of the 172 sharks it caught in the past three months as part of culling program aimed to reduce the number of shark attacks on humans. The $20 million shark mitigation policy, which ended last week, required the killing of tiger, bull and great white sharks measuring more than 10 feet. None of the sharks killed thus far have been great whites. All of the 50 that were killed were tiger sharks with one specimen measuring 14.8 feet. Fourteen sharks that measured under 10 feet were found on the drum line dead. Four sharks that were considered too weak to survive were killed.

This policy has attracted worldwide attention from activists who felt the policy was too barbaric. Among those to publicly condemn the policy were comedian Ricky Gervais (who also blasted hunting show host Melissa Bachman last year for legally taking a lion in South Africa) and Lesley Rochat, who made waves by protesting the cull by swimming naked with sharks and being photographed nude while suspended from a fake drum line. Below is another one of Lesley’s swimming-with-shark stunts.

Western Australia’s Fisheries Minister Ken Baston, ignoring the criticism, said in a statement: “The human toll from shark attacks in recent years has been too high. While of course we will never know if any of the sharks caught would have harmed a person, this government will always place greatest value on human life.”

In a 10-month period during 2012, five people were killed by great white sharks off the coast of WA – enough to have the region dubbed the ‘shark attack capital’ of the world, according to Australia Geographic.

Of course, Sea Shepherd shark campaigner Natalie Banks disagreed. She told CNN: “Of the 172 sharks that were caught on the drum line, the majority were tiger sharks which haven’t been involved in shark fatalities for decades in Western Australia.”