Joe Rogan: I Did Not Choke Out a Mountain Lion

Joe Rogan is many things — actor, comedian, UFC commentator, black belt holder in multiple disciplines — but he is... 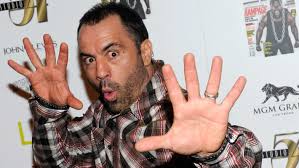 Joe Rogan is many things — actor, comedian, UFC commentator, black belt holder in multiple disciplines — but he is not a lion killer. The latter apparently needed to be clarified after the self-described satire news site Empire Sports ran a story that said the Fear Factor host had killed a mountain lion with his bare hands.

A highlight of the article reads: “News out of California never really shocks me anymore, but when the report surfaced about stand up comedian Joe Rogan killing a mountain lion, I was in disbelief. Rogan, who also does commentary for the UFC and is a black belt Jiu Jitsu fighter, was injured only slightly in the bizarre confrontation with the wild animal. Mr. Rogan was taken to a local hospital but released very shortly afterwards.”

I can’t either. Although I really wanted to believe that he did. Did you buy into the story? Comment below!