It’s been 18 years since a 100-plus pound cobia has been recorded in Mississippi, according to WLOX.com, but on Tuesday,... 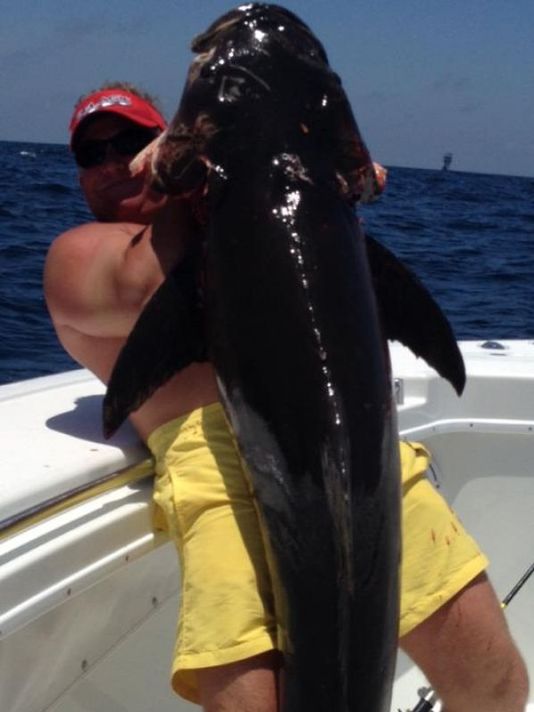 It’s been 18 years since a 100-plus pound cobia has been recorded in Mississippi, according to WLOX.com, but on Tuesday, Brandon Bosarge, a Mississippi resident, proved there are still monster cobia for the taking.

Bosarge’s cobia, caught during the Gulf Coast Cobia Classic, weighed in at 101.5 pounds, making it the third largest on record for a Mississippi tournament. WLOX reports that Bosarge took the fish in 60-feet of water with a custom-made green jig, in the company of teammates Carl Miller, Dustin Matthews and Shane Bennett.

Though it was caught on the Louisiana side of the Mississippi River, the fish was weighed in Mississippi as part of the tournament, which does not set boundaries on the fishing area.

This catch comes pretty darn close to the current record holder, a 106-pound, 13-ounce cobia caught by Randy McDaniel during the 1996 Gorenflo’s Cobia Tournament. (The second largest cobia was caught by Dennis Meins in the same tournament.)

“Dr. Franks [the examiner of the fish] said we probably had a state record, but the fish threw up in the water at the boat. Also, we caught it at 10 am on Tuesday and fished the rest of the day. We then fished all day Wednesday before weighing it in at 7:30 pm on Wednesday in Pascagoula. No doubt it lost weight over that period of time. But to have the first 100-pound cobia to be weighed in Mississippi in the last 18 years is good, too,” said Bosarge.