This winter we reported on a handful of new moose studies that cropped up in different states like Maine and... 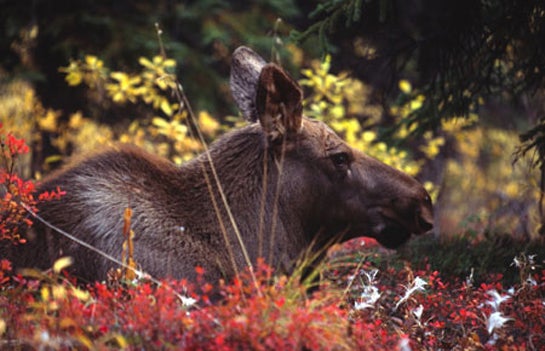 This winter we reported on a handful of new moose studies that cropped up in different states like Maine and New Hampshire, as biologists set out to learn why moose numbers were plummeting. Now, in response to preliminary data, wildlife officials in Maine and Alaska have adjusted their hunting seasons in an attempt to better manage shrinking moose populations.

Maine’s Department of Inland Fisheries and Wildlife will reduce moose permits by 25 percent for the 2014 fall season due to the recent impact of winter ticks, the agency announced Friday. Officials in Alaska shut down drawing permit hunts altogether for moose on Alaska’s North Slope, according to a Department of Fish and Game press release from Monday. Both states cited higher than average mortality rates as cause for curtailing their annual hunts.

Alaskan officials pointed to moose surveys from last month that show “a surprising and drastic reduction in moose numbers” in the region. The western North Slope experienced a 50 percent drop since 2011 while the eastern North Slope population fell from about 400 moose in 2013 to just 109 animals this year. Surveys documented few 10-month-old calves, indicating many did not survive harsh winter conditions. Most of the decline is attributed to inadequate nutrition associated with a late spring and poor summer conditions during 2013, as well as possible wolf predation on vulnerable moose.

The region saw similar declines during the 1990s and accompanying hunting restrictions, but the population recovered by 2008 when hunts were reinstated, reports the Daily News-Miner. Numbers dropped again in 2009, however, and fewer than 15 moose were harvested on average each year.

So what does this mean for North Slope hunts? The area is closed to all nonresident moose hunters this fall and until further notice. The only resident hunt will be cut two weeks shorter than last year.

While nutrition may be to blame in Alaska, moose in Maine are suffering from a major tick problem. This past fall marked one of the highest tick counts recorded by biologists in the past 10 years, and early data from a radio collar study identified about a 30 percent winter mortality rate for cows. That mortality rate usually averages about 10 percent. IFW wildlife biologists have documented moose winter kills throughout the state. “Many of the moose carcasses are engorged with winter ticks, and some are practically bare of hair as they have tried to rub the ticks off,” the agency wrote in the press release.

To counter the hit to Maine’s moose population, officials have set a limit of 3,095 permits available to hunters statewide. That’s down from the 4,110 permits available during the 2013 season. Officials hope decreasing the number of cow permits will help moose recover more quickly from winter losses.