Photo by Carl Moore; courtesy of NOAA “It was uglier than a mother-in-law,” is how commercial fisherman Carl Moore described... 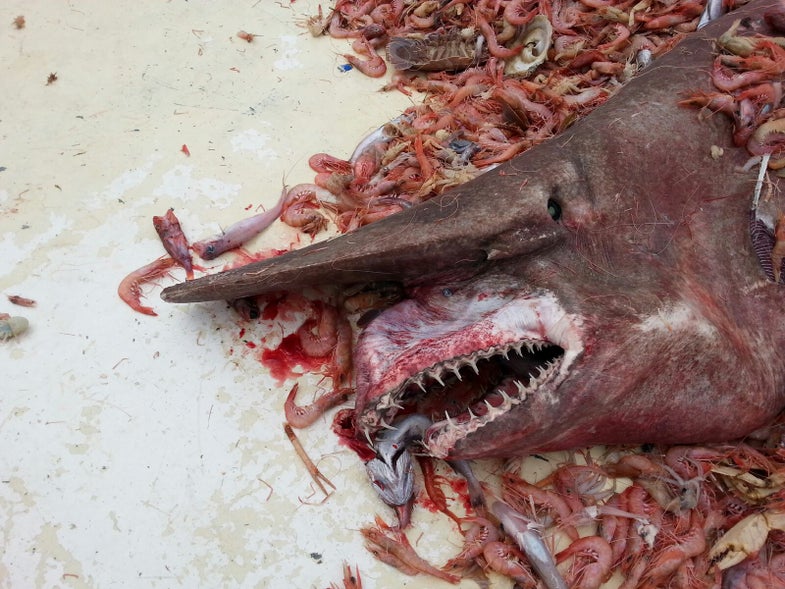 “It was uglier than a mother-in-law,” is how commercial fisherman Carl Moore described the rare 18-foot goblin shark he pulled from the waters off Key West, Fla.

Moore was fishing for royal red shrimp in 2,000 feet of water when he made the catch. He took photos of the strange looking creature, released it unharmed, and then reported the deep sea dweller to the National Oceanic and Atmospheric Administration (NOAA) — the latter of which made the agency very happy. The NOAA stated in the press release about this unusual catch: “NOAA biologists encourage people to call and report these rare sightings and catches, as the information they can collect allows them to know more about a species.”

Goblin sharks are extremely rare in the Gulf of Mexico, with only one sighting ever being reported in 2002. Most specimens have been found in the deep canyons near Japan. Goblin sharks are easily identifiable by their jaws, which protrudes greatly while eating. They are known as Tenguzame in Japan, where they are named after the mythical half human and half bird creature called Tengu.

“They don’t have any commercial value, other than their jaws. But, I have a Japanese friend who ate some of it and thought the tongue was delicious,” Charlott Stenberg, a marine biologist and science writer told southernfriedscience.com.