Some guys like Austin Hoffman of Milton, W.Va., have all the luck when it comes to fishing. He had no... 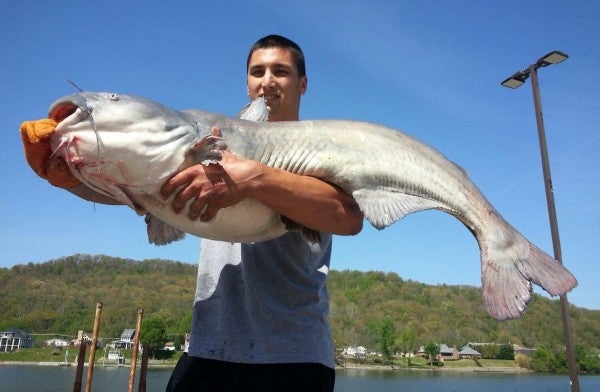 Some guys like Austin Hoffman of Milton, W.Va., have all the luck when it comes to fishing. He had no intention of fishing on April 26 but that didn’t stop him from catching the new state-record blue catfish.

“I was actually going out to test out a new drift rod holder set up I put in my boat,” Hoffman, 22, explained to Metro News. “I took my girlfriend with me and didn’t’ have any intention of catching anything. I didn’t even bring a net.”

The couple went to test the setup on the tailwaters of the Robert C. Byrd Lock and Dam on the Ohio River. Hoffman’s plan was to drift with the current to a certain spot then reel up the lines and head back up river to begin again.

“About the time I started reeling the ones on the rear up, I saw the front one go down,” he said. “I fought him for about 15 minutes and when I got him to the surface, there was no doubt in my mind it was a new state record.”

Hoffman’s record is especially impressive given that blue cats were almost eliminated from state waters decades ago following the construction of several river dams. In 1999, the West Virginia Division of Natural Resources began a program to reintroduce the species. State Biologist Scott Morrison said he knew the reintroduction would be successful.

“We suspect records for a new fish like this is going to be broken quite a lot,” he said. “However, this time it wasn’t broken by just a pound or so, it was broken by a considerable amount.”