Local officials in Seneca County, N.Y. are considering proposals to develop the land occupied by a former army depot, despite... 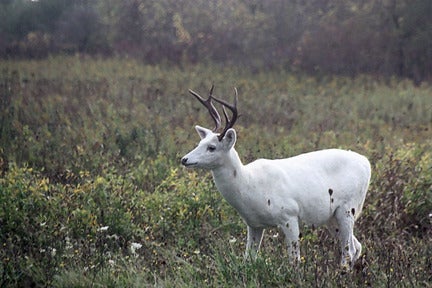 Local officials in Seneca County, N.Y. are considering proposals to develop the land occupied by a former army depot, despite the herd of approximately 200 white deer currently inhabiting the property.

Believed to be the nation’s largest white deer herd, these Seneca County deer have thrived on the fenced-in, 7,000-acre land plot since 1949. The U.S. Army Corps of Engineers currently maintains a staff at the Seneca Army Depot to locate and remove hazardous materials and unexploded ordnance. The team is expected to depart sometime in 2016, however, opening up the area to development and agricultural uses.

The towns of Varick and Romulus are already discussing plans to build a road through the middle of the property, which would expand possibilities for residential and commercial construction, according to Syracuse.com.

When the first white deer were spotted at the depot in 1949, the depot commander at the time issued orders to protect them. Since then depot officials and the Department of Environmental Conservation have coordinated limited deer hunts to help manage the brown and piebald deer numbers. Hunt managers also instated a lottery system to determine which hunters could harvest a white deer.

The advocacy group Seneca White Deer hopes to turn the depot into a protected wildlife area, but fears the towns of Varick and Romulus will maneuver the property back on the tax rolls as soon as possible. SWD president Dennis Money told Syracuse.com the agency needs local government backing to protect the white deer herd.

“But if we don’t get out politician’s support, it’s going to impact the fate and future of the world’s largest herd of white deer,” Money told the website.