A roosterfish with odd discoloration and a worn tail-fin was caught in Baja California’s East Cape region Sunday. The 40-... 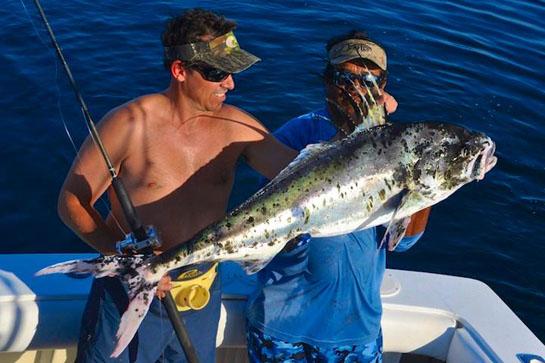 A roosterfish with odd discoloration and a worn tail-fin was caught in Baja California’s East Cape region Sunday.

The 40- to 50-pound fish looked as if it had been a canvas for a kindergarten finger-painting project. Dark blotches speckled its sides and the fish’s stripes were missing.

The unusual rooster was caught by crew members of the Jen Wren, which is operated by Mark and Jennifer Rayor of Jen Wren Sportfishing. Rayor told Pete Thomas Outdoors the fish was caught using a Spanish mackerel in about 60 feet of water.

Rayor could not explain its pigmentation and tail-fin, but a roosterfish with similar markings was caught in the same area a few years ago. On his Facebook page, flyfishing guide Lance Peterson recently posted a picture of that fish and the caption:

“Truly the oddest looking roosterfish I’ve ever seen. This solid specimen fought hard and swam away strong. However, its appearance would indicate it wasn’t in the best of health. Note the unusual blotches on it’s head and body…ranging in color from black to turquoise. What could cause this odd coloration and damage to the dorsal and caudal fins?”

Rayor nicknamed the roosterfish caught Sunday “Pigpen.” Any ideas what might be causing these roosters to look so strange?