Two unidentified men were arrested last week for rerouting water from the lowermost salmon stream in Santa Cruz, Calif. to... 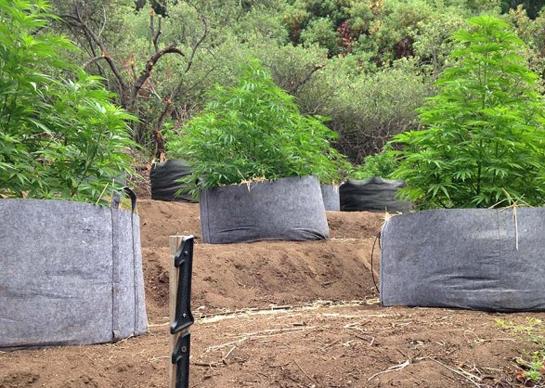 DFW assistant chief Brian Naslund explained just how harmful such operations can prove to wildlife. “Illegal marijuana growers steal substantial amounts of water, exacerbating our severe drought conditions,” Naslund said in a DFW press release. “Marijuana plants use six to eight gallons of water per plant, per day, and are a direct hazard to wildlife that eats the plants.”

Hazardous materials found on-site include hashish, fertilizer, dozens of butane containers, and other harmful chemicals, which may have already leaked into the water. On top of that, the suspects allegedly cleared vegetation from the site, which means the next rainfall will carry more contaminants into the creek.

Officials estimate that as many as 1,400 gallons were diverted from San Vicente Creek to the plants each day. The lower Vicente Creek supports a population of steelhead and endangered Central Coast Coho salmon.

In addition to marijuana-associated charges, the California Department of Fish and Wildlife told the press that the men are also looking at charges of streambed alteration, pollution, and placement of hazardous material on private property. Police suspect it took more than two people to run the operation, and are currently looking for other suspects. DFW officers valued the 180 marijuana plants at over $360,000.