The gray seal was nearly wiped out of New England decades ago, but the coastal population has since rebounded so... 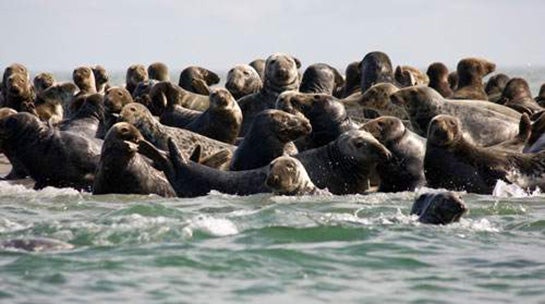 The gray seal was nearly wiped out of New England decades ago, but the coastal population has since rebounded so successfully, some residents are calling for hunts to control the burgeoning seal numbers.

Massachusetts offered a bounty on the gray seal until the 1960’s, causing the population to plummet. But as officials established protections for the animals, these creatures have rebounded to incredible numbers. The reason for this explosion derives from a combination of no hunting pressure, an abundance of food, and a large migration from Canada. Residents claim seals have been devouring fish stocks, attracting sharks, and fouling beaches. Tourists may think the seals are cute, but they tend not to like 600 pounds of seal lounging next to them in the sand.

Because of these growing concerns, residents of Nantucket have called on the seals to be hunted. One of those calling for a controlled hunt is Nantucket resident and recreational fisherman Peter Krogh. His Seal Abatement Coalition has so far collected 2,000 signatures. “This is a real threat to the traditional way of life on this island,” Krogh said, adding that the seals pose problems for the fishing and tourism industry.

Of course not all find fault with the steadily-growing seal population.

Keith Lincoln, who operates a seal watch ferry to Monomoy Island off Cape Cod, told WCVB.com that increased seal populations have been a boon to his business. In 1989, Lincoln said his tour averaged 50 seal sightings per trip. Today that number has risen to 2,000 sightings each excursion.

Another naysayer is Cape Cod-based International Fund for Animal Welfare manager Brian Sharp, who says the seals feed on fish that have little commercial value. He also added,”Culls of gray seals have not been shown to increase fish populations. It’s not that simple. What we’re seeing is a normal growth curve of seals repopulating an area.”

The National Oceanic and Atmospheric Administration published a population summary and research agenda earlier this year to address the growing concerns of residents on both sides of the issue. According to NOAA’s assessment, sightings of white sharks near the shore have increased along with gray seal numbers, although the individual sharks only stay in the waters for a few days.

What do you think? Should wildlife officials consider managing these seals like deer, or should they be allowed to continue on their current trajectory?