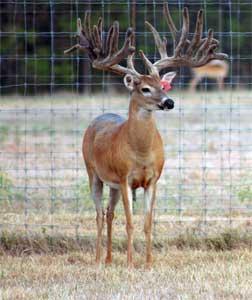 Governor Jay Nixon of Missouri vetoed two bills Tuesday designed to relabel captive deer as livestock and also transition management of these cervids to the Department of Agriculture.

Currently, captive deer are designated as wildlife and monitored by the Department of Conservation. The agency has called for tighter regulations on high-fence hunting preserves to reduce the spread of CWD. Nixon’s move has temporarily stymied the heated debate between the Conservation Department and Missouri deer farmers, who allege they are struggling to stay in business.

“For more than 75 years, our Department of Conservation has been held up as a model for wildlife management agencies across the country because of its incredible success,” Nixon said. “Redefining our deer as livestock to remove the regulatory role of the department defies both its clear record of achievement as well as common sense. Whitetail deer are wildlife and also game animals – no matter if they’re roaming free, or enclosed in a fenced area.”

In defense of the Department of Conservation, Nixon described the preserve owners who lobbied for the bills as having a “narrow commercial interest” that seeks to “mess with 80 years of success.”

“This destructive measure would violate our state constitution, would violate the will of the voters and undermine longstanding successful conservation practices,” Nixon said at the Missouri Conservation Commission.

Sam Jones, president of the Missouri Whitetail Breeders and Hunting Ranch Association, told The Kansas City Star that he and fellow preserve owners felt unjustly targeted for the spread of CWD.

“We’ve maintained all along that we’re not the problem,” Jones told The Star. “I’ve run one of my hunting operations for 20 years and I’ve never had any problem with disease. We test regularly and meet all the requirements. And most of the hunting ranches in Missouri are the same way.”

Jones also told The Star he hoped the General Assembly would override Nixon’s veto, and if it didn’t, the issue could end up in court.