In past years the Pacific branch of the USFWS has taken deliberate steps to restore native fish species to Oregon... 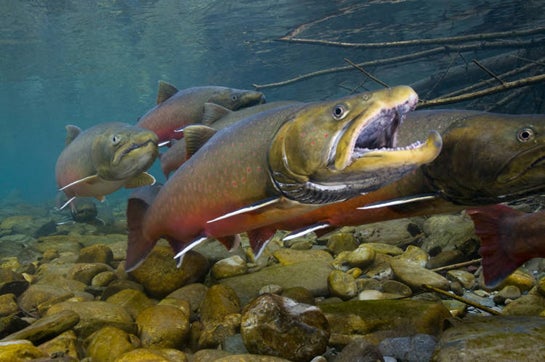 In past years the Pacific branch of the USFWS has taken deliberate steps to restore native fish species to Oregon waters. The agency proposed delisting the Oregon chub from its threatened status earlier this year, making it the first fish to escape the Endangered Species List without going extinct. Now the latest fish on its priority list to receive attention is the bull trout, which wildlife officials began reintroducing to Oregon’s Clackamas River in 2011.

USFWS shared a stunning video detailing the history and progress of the trout’s restoration on its Facebook page Tuesday. The clip includes beautiful underwater shots of bull trout and their habitat, along with interviews from the wildlife officials who’ve been restoring the trout to their historic waters.

“We have to do it because [bull trout] are endangered, and because their habitats are shrinking. And that system was still largely out of balance,” said former bull trout project coordinator Patrick Barry. “But in the grand scheme of things, bull trout aren’t going to reestablish in these habitats unless we help them out, unless we put them there.”

The Clackamus River contained bull trout until about 1963, when the last known sighting occurred. It wasn’t until June 2011 that officials began pulling bull trout from the Metolius River and releasing them in the upper Clackamas. The trout started spawning that fall, and by 2013 the fish had expanded from their initial tributary into other branches of the Clackamus. Although the 20-year project is only in its fourth year, the early results are promising.

“The preliminary read on the project is that the fish are thriving, they’re staying in the system, and they’re reproducing,” said USFWS fisheries biologist Chris Allen. ” All signs for the project are pointing in a positive direction.”

According to Allen, biologists anticipate devoting another two or three years to relocating trout before stepping back to let nature take its course.

“Bull trout are one of the purest, cleanest, wild-living organisms that we have in the aquatic system,” Barry said. “It’s an apex predator, so you don’t find them in great abundance, but when you do find them it just indicates that so many other things are balanced. It’s the completion of the ecosystem.”

For more details on the Clackamas bull trout reintroduction, check out the project here.