Although it’s already legal to own a suppressor in the Sunshine State, it is currently illegal to use one while... 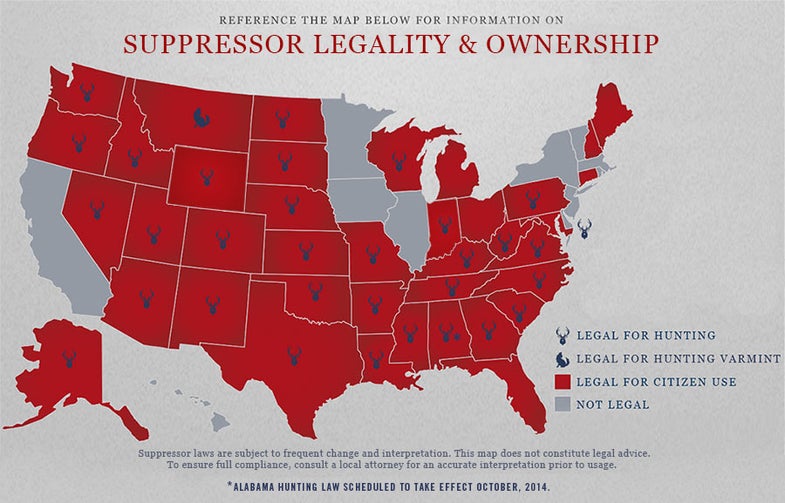 Although it’s already legal to own a suppressor in the Sunshine State, it is currently illegal to use one while hunting. On September 10, the Florida Fish and Wildlife Commission will consider a proposal during its meeting in Kissimmee to legalize the use of suppressors for hunting deer, turkey, gray squirrels, rabbits, quail, and crows.

This decision follows a rising trend, as Louisiana, Georgia, and Alabama have all voted in recent months to allow suppressors while hunting, reports Outdoorhub.com.

The American Suppressor Association further shows that now 33 of the 38 states that have legalized suppressors have also legalized them for hunting.

While a suppressor doesn’t silence a shot, the device contains “the expanding gases at the muzzle, allowing them to cool slowly, in a similar fashion to a car muffler,” explains the ASA. This reduces the shot’s decibels to a level safe for human hearing.

“There’s a lot of people who are actually hunters who, if you talk to them, over the course of the years have actually suffered hearing loss because of their firearm going off while they’re participating in hunting,” local hunter and manager of the Palm Beach Shooting Center Chuck Papp explained to WPTV5.

In addition to protecting a hunter’s hearing, the ASA also lists increased situational awareness, more effective communication, and increased accuracy (particularly for new and inexperienced shooters) among the benefits of a suppressor.

This proposal, along with those already passed in other states this year, marks an increasing public awareness that suppressors can increase both short- and long-term safety when using firearms.