A kayak fisherman from Sweden has broken the unofficial record for heaviest catch from a kayak by reeling in a... 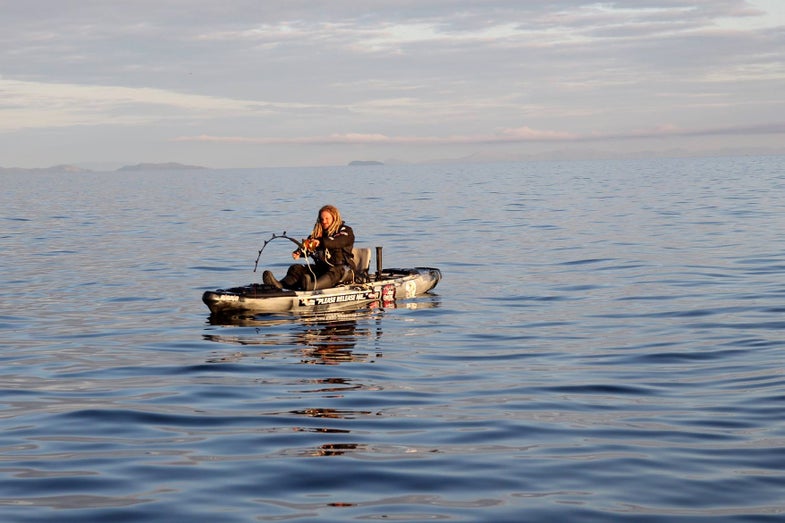 A kayak fisherman from Sweden has broken the unofficial record for heaviest catch from a kayak by reeling in a Greenland shark that weighed an estimated 1,247 pounds.

Angler Joel Abrahamsson was fishing off Andörja Island, Norway, in 1,600 feet of water when he hooked into the behemoth that would later measure 13.2 feet in length and with a girth of 6.6 feet, reports GrindTV. It took Abrahamsson more than 90 minutes to reel the leviathan to his shallow boat. Abrahamsson detailed the ordeal to Kayak Fish Magazine. “The fish is not a spectacular fighter, but it is a fish that constantly tugs its head down and keeps slowly pulling, making it impossible to ever stop winding,” Abrahamsson said. “So I put the reel in low gear and just grind the fish upwards.”

Abrahamsson added, “The fight was just [grueling] and extremely heavy. A few times it got a bit gnarly. I was scared of going over.”

Abrahamsson caught the shark as part of a study on the species conducted by Havfiskeinstitut Norge; members of the organization witnessed the catch from a separate boat. Abrahamsson and the scientists agreed prior to the trip that reeling the Greenland shark up to the leader would be considered a catch.

The estimated weight of Abrahamsson’s shark was determined by a formula using its length and girth.

The previous unofficial record for heaviest catch was held by a 400-pound salmon shark caught and released in Alaska in 2008. Abrahamsson’s shark was also released.

Abrahamsson catch was made all the more special by the fact that “…only about 10 to 15 Greenland sharks [are] caught every year in all of Scandinavia.”