A third year of severe drought is putting intense pressure on Nevada’s natural resources. After measures to maintain the dwindling... 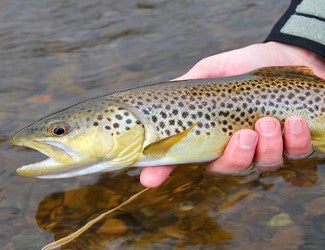 A third year of severe drought is putting intense pressure on Nevada’s natural resources. After measures to maintain the dwindling Truckee River left thousands of fish stranded in diversion ditches, volunteers and employees of the Nevada Department of Wildlife undertook a two-day rescue and relocation mission.

The team was able to save more than 6,000 fish, according to OutdoorHub. The rescued species were mainly rainbow and brown trout, but also included mountain white fish, sculpin, and several minnow species. Using nets and electro-fishing gear, the team easily scooped up the fish as they came to the surface. The fish were then deposited in large mobile fish tanks and relocated to several locations, including the Truckee River, Marylyn’s Pond in Galena Creek Regional Park, and Sparks Marina, according to KUNR.

According to the Reno Gazette, the drought has also pushed the state to lift fishing limits in several reservoirs in Elko County with the hope of individuals catching as much fish as possible before conditions (rising temperatures and lower water levels) become too severe for the fish to survive anyway.