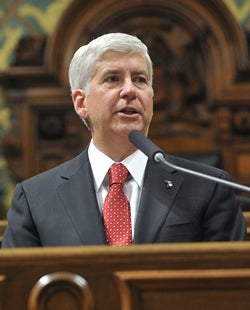 In its sophomore season, the program has upped its game and is in the midst of a summer of projects that have spanned from one end of the state to the other. The program is a model, we’d love to see duplicated in other states – and one we’re lending our support to with an Open Country grant.

The program’s next efforts, however, will bring things full circle.

The On-The-Ground program will make its next stop in the Upper Peninsula’s Gwinn State Forest where volunteers will enhance habitat in a Grouse Enhance Management area.

And the project will feature a special volunteer: Michigan Governor Rick Snyder.

“We’re excited that Governor Snyder is taking time out of his schedule to volunteer for wildlife habitat on public land,” said DrewYoungeDyke, grassroots manager for MUCC. “He signed the bill allowing volunteers to work on state land, and to invest more in conservation funding, so it’s inspiring to see him recognize the efforts of Michigan’s hunters, anglers and trappers by working shoulder to shoulder with us.”

Yes, prior to Gov. Snyder signing House Bill 4111 into law in June of 2011, volunteers were severely restricted as to the tasks they could perform on state-owned lands due to laws restricting the use of volunteers to perform tasks that could have been done by paid state employees.

While it may seem like a no-nonsense piece of legislation, particularly as state budgets grew tighter and tighter, there was significant resistance to the bill. But Gov. Snyder didn’t buckle. He signed the bill and Michigan’s public lands are the better for it.

Want to join in on the efforts and spend some time with Gov. Snyder? Signup to volunteer here.