Permission Granted: The Case for a National Hunting and Fishing Access Stamp

If the Duck Stamp has taught American hunters anything, it should be that you get what you pay for. I... 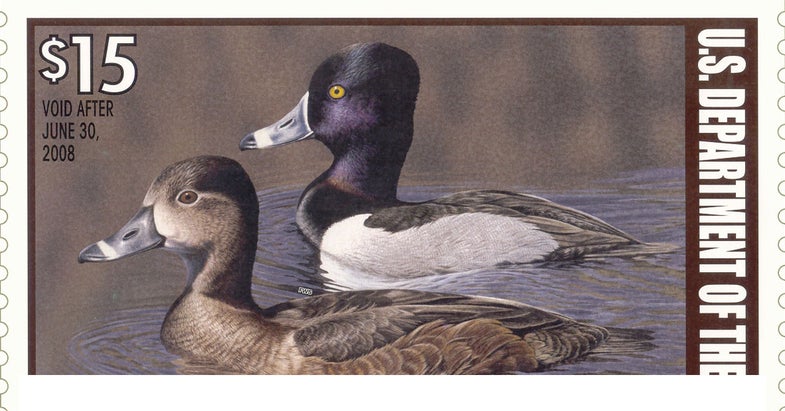 If the Duck Stamp has taught American hunters anything, it should be that you get what you pay for.

I still curse a little bit the $15 I pay per waterfowl season for this required little bit of adhesive paper, but even a half step back reveals the raging bargain that the federal stamp represents. Since its adoption in 1934, the Duck Stamp has raised some $800 million that has been plowed into habitat for waterfowl and access for the folks who hunt them.

It’s a little hard to quantify the amount of land that’s been bought or leased with Duck Stamp money, but it’s safe to say the number of acres is north of 6 million. Many of those are acres that are sacred to sportsmen, managed as National Wildlife Refuges. But millions more are smaller, satellite Waterfowl Production Areas that literally raise the ducks we hunt.

The success story of the Duck Stamp is an old one, but I mention it here because it’s a good example—maybe the best example—of how we could solve our national access problem. What if we created a national access stamp, an extra $5 or $15 per year that could open up millions of acres of productive hunting and fishing land to us? Would you buy one? What would you expect in return for the fee?

UNLOCKING THE GATE
Recreational access, to hunting and fishing grounds or even places to run a bird dog or take the kids hiking, is routinely cited as the primary reason we don’t do more of those things.

There are plenty of smart people and big organizations working on the access issue, but the efforts often are small, slapdash, and uncoordinated. Take, for example, one of the most ambitious of these access efforts, the “Voluntary Public Access and Habitat Incentive Program” in the 2014 Farm Bill. This is better known as “Open Fields,” and it provides $40 million annually through 2018 to pay states and tribes to open private land enrolled in Farm Bill programs to public recreational access.

In some states, the Open Fields funding has made an important difference in access. But in other states, it’s hard to find land enrolled in the program, and even when their information is included in a directory, some landowners are resistant to actually opening their fields to sportsmen, even though they are receiving federal funds—YOUR federal funds—to do that very thing.

But what if you held the magic access stamp? Would you be more likely to “get on”?

DEVILISH DETAILS
Here’s the way I imagine a national access stamp might work. If you bought the annual license, for let’s say $10, then you would have access to any land enrolled in any Farm Bill program, and you would be given access to a national directory of accessible land.

That means if you’re an Illinois upland hunter, you could travel to Nebraska and access enrolled farmland for pheasants and grouse. Or if you’re a Mississippi deer hunter, you could get on qualifying private land in Washington State for blacktails and mule deer. You could make reservations ahead of your trip, and wouldn’t have to hassle with trespass fees or the uncertainty of the farmhouse door-knock.

Because the federal Farm Bill funds would be supplemented by the user-pays revenue source of the stamp, additional money would be available to pay more landowners to open their lands. In fact, if the model worked as well as I think it could, landowners might even enter into a bidding competition that would make the best hunting and fishing lands available to sportsmen, because landowners would finally be compensated fairly for providing access to first-rate habitat. And landowners would know that the hunters and fishers using their property would be serious sportsmen—willing to pay extra for the privilege of access—and not random trespassers.

The access equation could easily be expanded to include state-specific access programs, such as Montana’s oft-copied Block Management Program, or South Dakota’s Walk-In Program and could include recreational lands in various federal programs, such as Wildlife Refuges, Corps of Engineers-managed riparian corridors, and even some Department of Defense properties that have previously been off-limits to the public because there was no good mechanism for ensuring who was using them.

One of the beauties of the Duck Stamp is that nearly all of its funds are put back on the ground. There’s very little money paid for operations and overhead. The same result could be achieved with an Access Stamp, especially if the management and directory of enrolled properties was delivered digitally.

So… what do you think? Would you buy a national access stamp, if you were ensured of more and better hunting and fishing ground?

After all, if the Duck Stamp is indeed our model, then you get what you pay for, and it may be high time to recognize that for sportsmen, free access isn’t worth as much as it once was.