Hunters across Pennsylvania joined the first ever Coyote and Crow Hunt Sit-In this past weekend to protest the state’s existing... 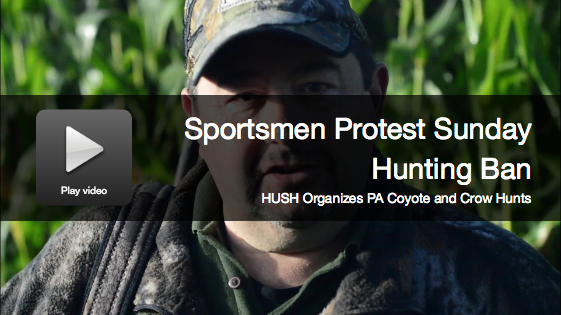 Hunters across Pennsylvania joined the first ever Coyote and Crow Hunt Sit-In this past weekend to protest the state’s existing ban on Sunday hunting.

Hunters United for Sunday Hunting organized coyote and crow hunts to lawfully increase awareness of the ban, which currently prohibits hunters from pursuing any species but coyote and crow on Sundays. HUSH coordinated the “sit-in” hunts to take place the same weekend as National Hunting and Fishing Day.

OL caught up with some of the key players for Sunday’s event, including District One Game Commissioner Ralph Martone.

“Sunday hunting is not just another day to hunt. It is vital for our young people—to keep them involved, and get new recruited hunters involved in hunting in Pennsylvania,” Martone said. “We have a whole generation of hunters out there that need Sunday hunting, and it is going to make the difference between losing hunters in the future and having one million hunters again in Pennsylvania.”

Sunday’s events are the only scheduled sit-in of 2014, but HUSH plans to continue spreading their campaign in 2015—after the conclusion of deer season. Check out our footage from the field in Centre and Dauphin Counties to see the hunters in action.