In just the last four years, Cory Peterson’s outfitting business has doubled in size to nearly 60,000 acres of deer-... 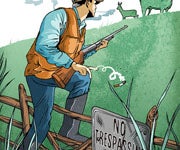 In just the last four years, Cory Peterson’s outfitting business has doubled in size to nearly 60,000 acres of deer- and turkey-rich ground in Nebraska’s Sand Hills. But Peterson, who also farms corn and raises beef cattle in the area, didn’t pursue many of his leases. Instead, neighbors came to him, offering to lease their land for annual payments that range between $1 and $3 per acre.

“Most traditional farmers understand the idea that hunting is something that should be free,” says Peterson. “But these guys have had gates left open by hunters, cattle shot by hunters, and water tanks shot by hunters. After a while, they just run out of patience.”

In Peterson, they find a neighbor who is familiar with their property, knows how to behave around their livestock, and has the ability to compensate them for the use of their land. Plus, he sometimes hires their sons as guides.

“We don’t pay a ton of money, but it’s enough to help cover farmers’ property taxes, and they don’t have to put up with the headaches that come with letting everybody hunt,” says Peterson. “It’s not that these guys want to lease. It’s just easier than the alternative.”

Why We Lose Access
Ask two landowners why they lease their land to outfitters or paying hunters, and you’ll get a dozen answers. This is an admittedly subjective list, but it covers many of the reasons that sportsmen lose access. Some are legitimate concerns, others are excuses that landowners give to explain why the public is no longer welcome on their property.

1. Legal Beagles
Many landowners believe they have legal responsibility if a hunter is injured on their property. The details differ from state to state, but generally a landowner is not liable if the hunter was a non-paying invitee, and the injury didn’t result from negligence.

2. Fear of Fire
Landowners are rightly terrified of wildfires, which can destroy crops, buildings, timber, and rangeland. Hunters can reduce the chance of starting a fire by parking vehicles on bare, unvegetated areas. And by not smoking. Period.

3. Gate Gripes
The most common complaint of farmers is that hunters leave their gates open, or close gates that should be left open. Hunters need to understand the common law of farm country: Leave gates the way you found them.

4. Off-Road Rage
In much of the West, if a hunter shows up at a ranch house with an ATV in tow, permission to hunt becomes iffy. Ranchers want hunters to stick to roads, and walking hunters generally get preference over motorized hunters.

5. Wake-Up Calls
Too often, hunters don’t make arrangements to hunt private land until the last minute. Landowners who post their property often cite as one reason those 5 a.m. calls from strangers seeking permission. Secure permission weeks before you hunt, and never assume that because you got permission last year, you have it this year.

6. Thankless Hunters
You don’t have to give a farmer a wad of cash or a bottle of whiskey to say thanks for letting you hunt, but you should make some gesture. A card, a holiday ham, or an offer to help with fencing or farmwork goes a long way toward softening resistance to a follow-up hunting trip.