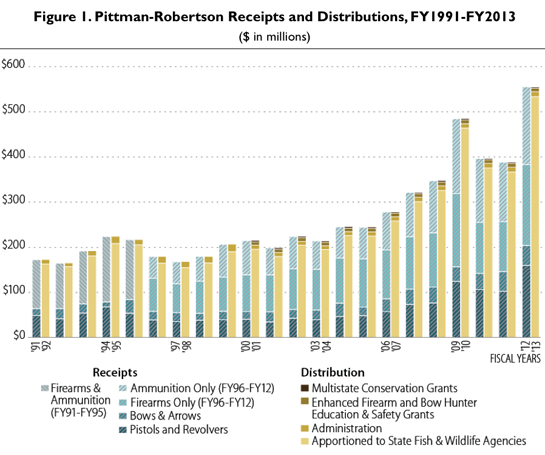 According to specialists M. Lynne Corn and Jane G. Gravelle in a March 12 Congressional Services Report, excise taxes on firearms, ammunition and archery equipment totaled $555.3 million in Fiscal Year 2012, which ended on Oct 1, 2012, an increase of almost 30 percent from the $388 million tallied in FY2011.

The previous single-year record was $474 million in 2010, spurred by a spike in firearms sales following President Barack Obama’s first election.

“As a result of the recent debate over guns, gun rights, and gun-related violence, there has been a marked increase in sales of many weapons as well as ammunition,” Corn and Gravelle write in the CSR’s introduction. “Through an excise tax on firearms and ammunition, such sales have a marked beneficial effect on funding for state wildlife programs through the Wildlife Restoration Program.”

Since 1937, the P-R Act has provided more than $7 billion for wildlife-related projects nationwide. The program has helped states buy more than 4 million acres of sensitive wildlife habitat and maintain another 40 million through agreements with other landowners, according to the U.S. Fish and Wildlife Service, which administers the program with the Department of the Interior.

The excise tax is set at 10 percent of the wholesale price for pistols and revolvers, and 11 percent for other firearms, as well as shells or cartridges. An 11 percent tax on archery equipment is also deposited into the fund. The tax is applied whether the equipment is likely to be used for hunting or not.

According to the CSR, of the tax on firearms and ammunition, approximately one-third is due to each source: 31 percent from pistols and revolvers sales; 37 percent from for other firearms, and 31 percent from ammunition. These amounts become available for expenditure to states in February of the following fiscal year.

According to the Associated Press, Texas, Alaska, Pennsylvania, Michigan, and California were among the top beneficiaries of the fund in 2012.

“It’s a great concept,” said Dan Yparraguirre, a deputy director at the California Department of Fish and Wildlife, told the AP. “It’s an important part of our agency’s annual budget.”

California received almost $10 million for wildlife, along with more than $2 million for hunter education in 2012. Yparraguirre said the money benefits 20 wildlife restoration areas in the state.

The Minnesota Department of Natural Resources stands to get about $16 million — a record amount and more than double what it received just six years ago.

Texas’ share of the tax surged more than 40 percent in one year to $24 million. It was just $10.7 million in 2006, according to the Houston Chronicle.

The most significant aspect of both the P-R Act and the Dingell-Johnson Act is they were created and supported by a constituency — hunters, archers, outdoors enthusiasts — who essentially volunteered to tax themselves to finance conservation programs.

Few other tax-generating “user groups” can make that claim.

Corn and Gravelle conclude in their CSR that P-R tax revenues could top $600 million when FY2013 monies are allocated in February 2014.

“With reports of surges in gun sales due to current controversies over guns rights and gun-related violence, substantially more funds seem likely to be available in FY2014,” they write.

For more, go to:
— Guns, Excise Taxes, and Wildlife Restoration