With the 16,000-acre Black Forest wildfire in Colorado finally contained, hunters in the West are nervously anticipating what this summer... 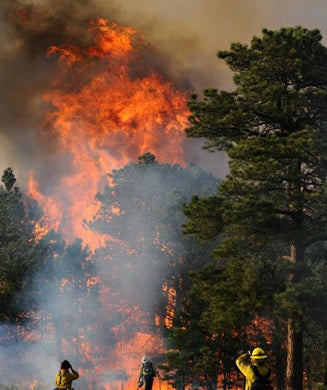 With the 16,000-acre Black Forest wildfire in Colorado finally contained, hunters in the West are nervously anticipating what this summer and fall’s fire season has in store. While many forest fires are beneficial to wildlife and habitat, the recent trend of intense wildfires has been devastating for land in the West. Unfortunately, experts say we can expect more of the same this year.

The National Interagency Fire Center reports 67,774 fires burned 9.3 million acres of wildland across the United States in 2012, the hottest year on record in continental North America.

On June 1, the NIFC issued its wildland fire potential outlook for June through September 2013. As expected, the agency cited escalating temperatures and continuing drought — 12 of the driest years on record in U.S. have occurred in the last 15 years — in projecting “above normal” fire activity across the West this summer and fall, especially in the Plains, the Southwest, and California.

In a survey conducted by OL, nine former and current federal and state forestry officials say they expect the trend established in 2012 — fewer but more intense fires — to continue in 2013.{C}

“The number of fires is decreasing in some areas, but the fires are getting larger and burning hotter,” says Bill Gabbert, editor of WildfireToday.com.

“In every state, it seems like they’re having their largest-ever fire,” agreed Ed Shepard, a former BLM Assistant Director and Oregon State BLM Director who is now President of the Public Lands Foundation. “Fires seem to be getting bigger.”

But the severity of wildfires in terms of damage to wildlife and habitat is not necessarily gauged by size but by the ground-to-canopy extent of the damage inflicted.

A relatively new type of wildfire, the super-heated earth-burner coined the “megafire,” incinerates the planet to its bones and has become increasingly common. Many fear these combustive, man-made ghosts of the past’s poor fire policy will haunt the West for centuries.

SEVERITY NOT SIZE DETERMINES DAMAGE
While the the projections of more large-scale summer fires burning into fall hunting seasons are daunting, the raw numbers don’t distinguish between the types and severities of fires, which can vary greatly, regardless of size.

These distinctions will determine how wildlife and habitat recover, and when hunting units within burn areas will open for this year’s season, next year’s season, or ever.

“There is a mosaic, or a quilt, of different burns in a fire area,” says David Buckley a senior consultant with Wildfire Solutions, Inc., of Fort Collins, Colo. “It really reflects what the recovery and rehabilitation of those lands will be.”

And while the media often portrays wildfires as catastrophes of uniform devastation, most — regardless of size — are actually checkerboards of understory fires that consume ground-layer vegetation but rarely significant trees, creating a patchwork of habitats in their immediate wakes.

“The fires are burning bigger but not, necessarily, hotter,” says Dr. Timothy Ingalsbee, director of the Western Fire Ecology Center for the American Lands Alliance at the University of Oregon in Eugene. “Most fires are burning faster, hop-scotching on the ground, leaving a landscape mosaic of burned, slightly burned, and unburned.”

Most wildland fires create this “mosaic” of ecosystems in their immediate wake and are often vibrant with new growth and wildlife within weeks, if not days, of the burn. Hunters are well-acquainted with the benefits of hunting the “burns for bucks” a year or so after a fire, but may overlook burn area’s potential in a fire’s immediate aftermath.

“Nature responds immediately,” Ingalsbee said. “Green shoots spring from the ash and all kinds of new plants attract wildlife like never before.”

“I’ve seen buffalo come back to a burn area while it is still smoldering,” said Richard Homann, Fire Division Supervisor for the Colorado State Forest Service in Fort Collins, Colo.

In contrast, a growing number of fires are high-severity fires, the so-called megafires, man-made firestorms that consume everything in their path, often altering the landscape for centuries. These megafires include the 1988 Yellowstone 2 million-acre firestorm, New Mexico’s 150,000-acre Las Conchas Fire in 2011, and this year’s 16,000-acre Black Forest Fire in Colorado.

There is no official definition of megafire and most applications are anecdotal references to size, but that image is inaccurate, says Dr. Jeffrey Englin of the Morrison School of Agribusiness and Resource Management at Arizona State University in Tempe, Ariz.

Englin, who has written more than 50 research papers on fire’s impact on the environment and natural resources, said a megafire is a crawling “super-heated” furnace of flame that strips the earth of “soil, seedbanks, insects, everything” and “leaves you walking around in molten dirt, like on volcano glass.”

AREAS MOST VULNERABLE TO MEGAFIRES
Where there’s fuel, there’s fire.

And where there’s more than a century of fuel composting in a tinder box of record-setting heat and persistent drought, conditions are ideal for a megafire.

“We’ve allowed the build-up of fuels by disrupting the natural fire cycle,” Shepard said. “In a warming climate, you get ignition.”

“What we’re looking at is the impact of fire-suppression on the ecosystem and a lot of the ecosystems are not balanced because of that suppression,” Homann said.

Where are ecosystems generally most unbalanced?

This is usually areas with increasing residential encroachment, and areas in and around national parks, Englin said. “National parks are places where they’ve done a lot of protective work to keep natural fires from happening,” he said. “The more you protected them in the past, the more vulnerable they are now.”

“Suppression isn’t the only problem: residential encroachment into wildlands is contributing as well,” Homann said. “A residential population comes into a wildland area and it changes the dynamic. It’s a complicated discussion because there are so many variables.”

The irony is while the Forest Service has adopted a policy — decades too late, many say — to allow naturally occurring wildland fires to run their course, that’s not possible when lives and property are at risk in the rapidly expanding pattern of residential development adjacent to public lands.

Therefore, if you’re looking for a public lands hunt anywhere in the West this fall, you may want to avoid units near national parks and encroaching residential development, particularly in the Southwest and California’s Sierra Nevadas.

“The greatest risk region [for a megafire] is the Sierra Nevadas,” Englin said.

“I think we’re already beginning to [be at risk for megafires] in the Southwest and on the West Coast. Even here in Oregon — and in some places in Washington and Idaho — it’s picking up,” Shepard said. “And, of course, there’s (Black Forest) in Colorado already.”

Overall projections call for bad megafire seasons in California and portions of Arizona and New Mexico, Gabbert said. “It all depends on the weather, if it’s persistently hot, dry and windy, the risk increases,” he said. “If conditions do not change in those places, the fires will be larger and there will be more of them.”

To find out if the area where you hunt has been impacted by wildfire, check out last summer’s wildfire blog from Ben Lamb.