Three dozen volunteers devoted a coveted summer Saturday to making a difference for public access and hunting quality in Michigan.... 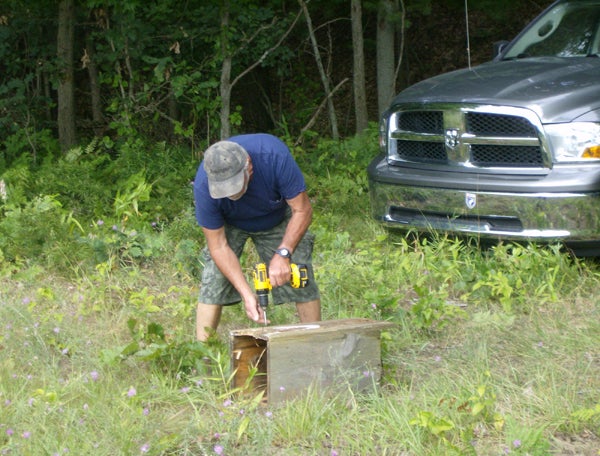 Three dozen volunteers devoted a coveted summer Saturday to making a difference for public access and hunting quality in Michigan.

“It’s summer. And it’ Saturday. But they still showed up,” said Drew YoungeDyke, MUCC’s grassroots manager and coordinator of the OTG project. “I think that says something about the level of commitment we have to improving public access and opportunities.”

A total of 59 wood duck boxes were maintained and five new boxes were installed.

Those totals may seem fairly insignificant, but Mark Mills, a regional biologist with the Michigan Department of Natural Resources disagrees.
“This work wouldn’t have been done without volunteers,” said Mills. “The wood ducks won’t use the nests unless they’re cleaned out every so often, and we simply don’t have the staff time to do it.”

And none of the work would have been possible for volunteers to do without passage of legislation in 2011 that allows volunteers to assist with state-led efforts on public land.

Dubbed the “Volunteer Bill,” House Bill 4111 eliminated many of the barriers that prevent volunteers from assisting with work on public lands. Previously, volunteers weren’t allowed to do jobs that paid state employees could perform. As the state budget became tighter and tighter and the DNR’s staff size was reduced, it was clear that Michigan’s public areas were in dire need of some help.

Not coincidentally, it was MUCC that helped lead the push for the legislation’s passage.

“There was a lot of work involved with getting the Volunteer Bill passed,” said YoungeDyke. “It’s very important that the bill be put to use and that’s exactly what we intend to do.

The next project in this series will take place on August 3 — another Saturday. This time it will be the Somerset State Game Area in southern Michigan’s Hillsdale County that’s the focus. Volunteers will be clearing locations for clover plots to provide public land deer hunters with prime hunting locations.