The state of North Carolina will challenge Alcoa Inc.’s assertion that it owns a 38-mile stretch of riverbed in the... 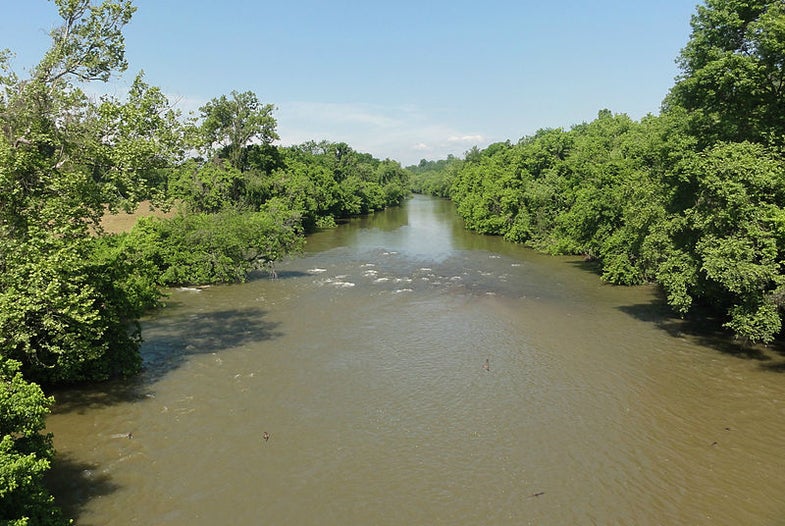 The state of North Carolina will challenge Alcoa Inc.’s assertion that it owns a 38-mile stretch of riverbed in the Yadkin River, filing a lawsuit on August 2 that could have broad implications for public access to water bodies nationwide.

State officials claim Alcoa has no ownership rights to the bed of the Yadkin River, over which four dams were built beginning a century ago. The lawsuit asks a Wake County judge to rule that the state retains ownership rights to the submerged land, so North Carolina will have a financial stake in power produced by the hydropower dams.

The state and a grassroots coalition of local groups, spearheaded by the Yadkin Riverkeeper Inc., are also contesting Alcoa’s effort to secure a new federal license — 401 Certification Application — that would allow it to continue operating the dams for up to 50 years.

The river runs for about 200 miles to the east of Charlotte and becomes the Pee Dee River before entering South Carolina en route to the Atlantic. The dams powered an aluminum smelter that closed in 2007 and Alcoa has since sold the electricity to commercial customers.

But North Carolina says that water isn’t Alcoa’s to sell.

Pittsburgh-based Alcoa said it will ask the case be moved to federal court.

“We believe this filing is flat-out wrong. Ownership of submerged lands is a question of federal law — and we will immediately begin the legal process to move it to federal court,” Alcoa’s E. Ray Barham told the AP. Alcoa “is confident in its ownership position and that it will be firmly established in court.”

The company noted that the U.S. Supreme Court last year issued a ruling on riverbed property rights in PPL Montana vs. the State of Montana that would favor its stance.

The Supreme Court sided in 2012 with PPL Montana over who owns the riverbeds beneath 10 dams on three rivers. Montana sought to collect more than $50 million in back rent and interest after that state’s highest court determined the state owns the submerged land beneath the dams. The Supreme Court ruled that navigability must be determined on a section by section basis, not on rivers in their entirety.

Yadkin Riverkeeper Inc. has been disputing Alcoa’s ownership claims for years, always maintaining that public waters cannot be sold away for private gain.

“No FERC license and no settlement agreement should give that exclusive right to a single corporation or a private interest,” it says in a position statement.

In 2009, Yadkin Riverkeeper supported North Carolina’s request to the Federal Energy Regulatory Commission to give back the Yadkin to the state.

“The state has a legal obligation to find out who owns this important resource,” Yadkin Riverkeeper Dean Naujoks said. “Alcoa had numerous opportunities to provide the proper deeds of ownership and put this whole issue to rest more than a year ago.”

There’s another reason to wrestle ownership from Alcoa, Naujoks says:

“The Yadkin River is still not fishable as result of Alcoa’s extensive pollution problems,” he said. “The company is still failing to comply with dissolved oxygen standards and cannot demonstrate title of ownership. Our members remain concerned that (401 relicensing) will be used as a shield to preserve the status quo from enforcement efforts for years to come.”

— Alcoa and the Yadkin River: What’s next?

— Who owns the Yadkin River – revisited

— No clarity on who owns the Yadkin riverbed