Editor’s Note: This is part 2 of 2-part series on battling the HSUS to open a wolf hunt in Michigan.... 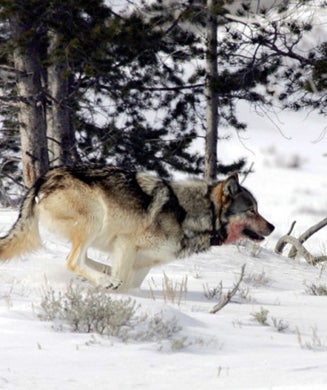 Editor’s Note: This is part 2 of 2-part series on battling the HSUS to open a wolf hunt in Michigan. See part 1 of this series here.

So where were we?

Ah yes. The Humane Society of the United States has come to Michigan. Again.

Last time these anti-hunting extremists were here was in 2006 when they spent in the neighborhood of $3 million to repeal the state’s recently-enacted dove hunting season.

HSUS’ message was simple: You can’t eat doves. Hunters will murder millions of the birds and leave the population in peril.

Never mind that doves are the most popular game species on the planet. Forget the fact that millions of folks eat millions of doves on a regular basis. And never mind the reams of scientific evidence that proves — without challenge — that hunting doves has very minimal impacts on the overall dove population.

Facts vs Money
Facts do not matter in elections. Money matters. Spend more money than your opposition and your odds of success on the ballot are all but assured.

HSUS spent nearly $3 million to defeat dove hunting in Michigan. The hunting community spent just under a half-million bucks to defend our rights.

And it’s happening again, but this time with wolves.

Late last year, the U.S. Fish and Wildlife Service finally removed Michigan’s wolf population from the Endangered Species on the condition that the state of Michigan draft and then implement an approved management plan to ensure wolf numbers would remain stable.

As a result of that science-based plan, the Michigan Legislature declared wolves a game species and handed management of the species over to the state Department of Natural Resources.

The Michigan DNR then unveiled a plan to allow hunters to participate in an extremely limited hunting season to help curb an upward trend in wolf-human conflicts in certain areas of the state’s Upper Peninsula.

Adam Bump, a DNR biologist who has spent as much time focusing on wolves as anyone in the state, said the hunt was necessary to try and alter the behavior of problem wolves. The DNR (and USFWS) had exhausted all other measures including both lethal and non-lethal tactics. It was time to hunt wolves.

The season is slated to begin November 15 and has a quota of just 43 wolves.

As expected, HSUS immediately announced its intent to put the Legislature’s decision on the ballot. The group formed a shell organization called “Keep Michigan Wolves Protected” and the group began circulating “information” that was based completely in lies.

The group claimed hunters would be killing wolves from helicopters, that the season would be “arbitrary” and that “thousands” of wolves would be slaughtered.

But the biggest lie told was that the group was “Michigan-based” and that “Michigan’s residents” were opposed to the season. A simple check of the organization’s endorsement roster paints a far different picture.

The Keep Michigan Wolves Protected group raised about $500,000 with well over 90 percent of that coming from outside the state of Michigan, including almost $400,000 directly from HSUS.

What HSUS didn’t account for, however, was the resolve of Michigan’s conservation community, it’s legislature and the will of the residents.

In 1996, in response to an HSUS attack on bear hunting, Michigan’s residents overwhelmingly approved Proposal G that requires, by law, that Michigan’s wildlife species be managed based on sound science.

In an effort to ensure the will of the people was upheld, the state legislature approved Public Act 21 which allows the Natural Resources Commission to share authority with the legislature to designate game species. The Act also allows active military members to receive free hunting and fishing licenses.

With the passage of Public Act 21, HSUS’ initial referendum efforts were rendered moot. HSUS could still place their initiative on the ballot but it will have no impact regardless of the outcome of the vote.

In an effort to ensure the will of the people was upheld, the state legislature approved Public Act 21 in May. PA 21 allows the Natural Resources Commission to share authority with the legislature to designate game species. The Act also allows active military members to receive free hunting and fishing licenses.

With Gov. Rick Snyder’s signature to enact the legislation, HSUS’ initial referendum efforts were rendered moot. HSUS could still place their initiative on the ballot but it will have no impact regardless of the outcome of the vote.

But that’s not stopping HSUS. They have stated that they not only intend to carry their initiative forward (wasting voter time and taxpayer’s dollars), but they are now currently collecting signatures for another referendum, this one to repeal Public Act 21.

A Little Recap
HSUS was trounced in 1996 when Michigan voters supported science-based wildlife management in a landslide.

HSUS was again slapped when Michigan’s legislature — recently voted into office to vote on their behalf by Michigan’s residents — approved Public Act 21 and essentially squashed HSUS’s California-funded referendum to remove wolves from the list of game species.

And yet the group insists that a frivolous referendum be put to a vote alongside another referendum that goes against what Michigan’s voters have supported on every occasion: Science-based wildlife management.

Surely, the folks of Michigan have had enough of these people. There’s no way they can garner enough support to overturn a wolf season that’s based in science and required by the U.S. Fish and Wildlife Service as part of Michigan’s wolf management plan, right?

HSUS did not allow the 1996 passage of Proposal G to deter in from coming back in 2006 and spending millions to pump non-hunting voters full of lies, misinformation and cash-fueled crap.

HSUS has vowed to spend at least $3 million on the effort to remove wolves from the list of game species and, furthermore, they want to make certain that the state’s Natural Resources Commission is not allowed to determine what species are managed with hunters. Why? Because they know if that law remains in place they are defeated in Michigan. Forever. The NRC’s decisions are not subject to referendum. Thus HSUS would have very little recourse once the NRC takes action.

If Michigan’s hunters, anglers, trappers and conservationists don’t step up, if the outdoors industry as a whole doesn’t start to play the game the way it must be played, Michigan’s 2012 wolf season could likely be its last.

And thus far, the outdoors community has not shown itself to be willing to fund a fight.

The Bigger Battle
How does all of this apply to the Open Country theme?

HSUS isn’t choosing its battles arbitrarily. It’s spending millions of dollars on research, polling and data to determine which fights are the most winnable.

It knew it could defeat dove hunting in Michigan because polling showed that Michigan hunters were ambivalent toward dove hunting. It wasn’t something they’d always done, thus they didn’t care if others could do it or not. It was a classic case of “me first” mentality.

HSUS knows that it can raise exponentially more money than the hunting community has shown it can raise.

HSUS’ goal is very simple and crystal clear: They will pick off the fights that are easiest to win and they know exactly how much they have to spend to do it. With each victory, they start to change the balance. Hunters and anglers have long been heralded as the champions of conservation because our license fees and tax dollars through programs like the Pittman-Robertson Act help fund wildlife management.

But what happens when HSUS closes hunting, species by species, season by season?

We begin to lose some of that clout. It becomes harder to argue that publicly-owned lands should make hunting and fishing access a priority.
When that happens, we all lose.

And unless we are willing to play the game the way HSUS plays, it’s not a question of “if.”