Jeff Smith (pictured above) has never considered hunting anywhere else on opening day of goose and duck season but in... 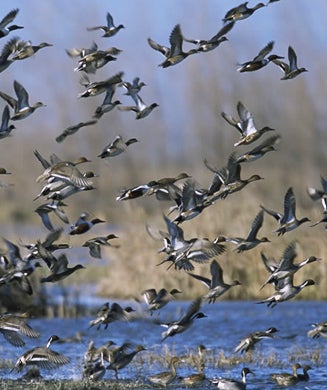 Jeff Smith (pictured above) has never considered hunting anywhere else on opening day of goose and duck season but in a blind somewhere within the 190,000-acre Klamath Basin National Wildlife Complex.

It’s where he and his family has enjoyed the first day of waterfowl season for years – until, that is, this year when Smith joined the legion of “refuge refugees” suddenly forced to find someplace other than a national wildlife refuge to hunt.

“We were going up this whole weekend [Oct. 5-6] to Lower Klamath and Tule Lake [NWRs within Klamath Basin National Wildlife Complex], but with the government shutdown, that’s out now,” said Smith, of Yuba City, Calif. “Like a lot of people, we’re scrambling, making a lot of phone calls.”{C}

Smith is among thousands of hunters nationwide who have been denied access to their favorite public land sloughs, potholes, and fields since the federal government’s Oct. 1 partial shutdown forced national wildlife refuges to close their gates just days before goose, duck, bowhunting seasons opened in many areas of the country.

While the federal shutdown has not prohibited access or hunting in most national forests, wilderness areas, BLM tracts and other “unregulated” federal lands, furlough of 7,825 of the 9,551 U.S. Fish & Wildlife Service employees has fostered the closure of 561 national wildlife refuges. This includes the 36,000 waterfowl production areas on 367 refuges where hunting is permitted. The shutdown also prompted cancellations of numerous Wounded Warrior, disabled and youth waterfowl hunts scheduled on NWRs in early October.

“It is taking a pretty big toll on the public lands hunter, absolutely,” said Smith, the hunting coordinator for the 18,000-member California Waterfowl Assocation. “Eighty percent of our members hunt public lands, and there are only so many places to hunt.”

“Public lands that are available are already crowded under normal circumstances,” Smith said. “They’ll only be more crowded now. Everyone is making a lot of phone calls.”

“All this stuff going on right now, it’s not good — all these weekend warriors will put more pressure on the places where we hunt,” said Johnny Porter of Webfoot Guide Service in Stockton, Mo.

Many guides, outfitters, lodges, and businesses that cater to waterfowlers, however, say the NWR closure will not affect them because their clients primarily hunt private lands. But many are concerned that prospective hunters may believe the government shutdown has postponed seasons and prompt them to cancel their plans.

“The closure of national wildlife refuges will not impact my hunts directly as I operate mostly on private land,” said Capt. Matt Martin of Frontier Waterfowl Guide Service in Swanton, Vt.

“It won’t affect us. I do all my hunts on private land,” said Jeff Colwell of Front Range Guide Service in Windsor, Colo. “Bird hunts is all I do and I’ll still be hunting birds.”

But for others, such as Will Beaty of Central Flyway Outfitters in Winnie, Texas, the closure of nearby Anahuac National Wildlife Refuge and the U.S. Army Corps of Engineers Wallisville Project, means tens of thousands of acres of public land in southeast Texas is no longer accessible to wingshooters who flock there beginning every October.

They’ll still come, he hopes, and if they do, he hopes they call him.

“It will help us,” he said. “It will benefit us by driving some (hunters) our way. There’s not a lot of public lands around here so I am sure it will affect the guys who do the day-hunts the most.”

According to Andy Walgamott, editor of Northwest Sportsman magazine in Seattle, a continuing NWR closure “through mid-October could impact waterfowling and upland bird hunting” on at least eight regional NWRs, including early season deer on Little Pend Oreille NWR.

But overall, he said, the closures won’t affect waterfowl hunters in the Columbia River Basin dramatically — yet.

“A lot of guys hunt private fields and ponds, so I’m not sure on those impacts. Also, duck and goose season is usually slow at the start,” Walgamott said.

In the Pacific Northwest, the most immediate impact of the NWR closure won’t be on waterfowl hunting, but on Columbia River salmon fishing, he said.

“Here’s an impact that is a little different — the closure of the White Bluffs boat ramp in the Hanford Reach National Monument” is having significant consequences, Walgamott said. “That provides good access to, well, the Hanford Reach of the Columbia River where a record number of fall Chinook are returning this season.”

He said the ramp closure is “concentrating anglers at the upstream Vernita Bridge ramp,” diluting opportunity and creating the potential for a crowded ,close-quarters-combat fishery.

UNCERTAINTY
Ducks Unlimited spokesman Eric Keszler said the group is concerned that the NWR closure will dissuade some hunters to stay home, reducing the number of duck stamp purchases and, in turn, providing less revenue for USF&W waterfowl management programs.

“This thing is so fluid, we’re really not sure what the impacts will be,” Keszler said. “It all depends on how long it goes.”

Should the shutdown continue, Ducks Unlimited has “two primary concerns,” he said. “The first is the loss of hunting opportunity. Closing national wildlife refuges is going to impact hunting opportunities for waterfowl hunting, especially now that the seasons are getting under way.”

The second concern is more subtle, but potentially more damaging. “We’re concerned with the impacts the closures will have on conservation projects we have on federal lands,” Keszler said. “A lot of the work we do involves federal programs and partnership with the federal government.”

ECONOMIC IMPACTS
According to 2006 statistic compiled by the National Wildlife Refuge Foundation, the nation’s NWR system generates $1.7 billion in annual sales for local communities, creating nearly 27,000 jobs that accrue a $543 million annual payroll, contributing more than $185 million in tax revenue. A significant component of this economic boon is engendered by waterfowl hunters.

The NWR shutdown has local businesses and governments assuring hunters, anglers and other outdoor recreational users that they are still open, even if the federal government isn’t.

“The federal shutdown hits Vermont during one of the state’s busiest seasons for hunting, fishing, and wildlife viewing,” said Patrick Berry, Vermont Fish & Wildlife Commissioner in a press release that included a list of alternate public sites to hunt and fish. “This is a time when rural communities across Vermont really count on the local revenues generated by hunting and fishing activities.”

“It’s going to hurt from an economic standpoint,” Central Flyway Outfitters’ Beaty said of the closure’s impact in southeast Texas. “The gas, food, lodgings that hunters spend to get here — and spend while they’re here — you just cannot afford to lose that. If (the shutdown) goes on too long, it’s definitely going to affect the local economy.”

Tule Lake and Lower Klamath National NWRs are “a huge destination — whole towns will be shut down,” California Waterfowl Association’s Smith said. “The big influx during the waterfowl seasons is a big money-maker for these small towns. It’s definitely hurting a lot of people.”

Other “refuge refugees” are angry that the federal government can deny hunters access to lands hunters bought and pay to maintain.

“In these times of ever-dwindling access, losing any public ground opportunity due to political infighting is painful,” said avid goose hunter Skip Knowles of Peoria, Ill., editor of Wildfowl.com. “It’s especially painful since it is largely hunter’s dollars that fund so much of this habitat management through the federal duck stamp program and monies from the Pittman-Robertson act, among many other programs.”