Is Pest Control the Future of Hunting? 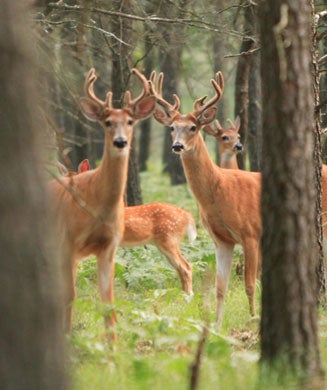 David Von Drehle recently wrote a great article for Time magazine titled “America’s Pest Problem: Time to Cull the Herd.” In the article, Von Drehle explains how many wild game populations have boomed back since the mid-1900s (for example, the American alligator population has increased by 400 percent, whitetails are up 800 percent, and Canada geese are up 370 percent) and now those extra critters are causing problems in urban and suburban areas.

“We have too many wild animals — from swine to swans,” Von Drehle writes. “Whether you’re a Walmart employee in Florida wondering what to do with the alligator at your door, a New Yorker with a hawk nesting on your high-rise or an Ohio golfer scattering a flock of Canada geese, you now live, work and play in closer proximity to untamed fauna than any other generation of Americans in more than a century.”

Incredibly, Von Drehle’s solution to the “pest problem” isn’t relocation, or contraception, or higher fences for gardens and bear-proof garbage cans. His solution is hunting.

“This is nature’s way: an equilibrium of prey and predator, life and death. There is no getting around the fact that humans now dominate the environment. We were wrong to disrupt the balance by killing too often during the heedless years of the 19th and early 20th centuries. Now it is wise to correct the more recent mistake of killing too rarely,” he writes.

Rising to the Challenge

In many ways, the situation is perfect. The public needs hunters to kill game and local lawmakers are starting to give us the access and opportunity to do so. As more gardens are gobbled up and more BMW bumpers are bloodied, public opinion continues to shift in favor of hunting.

The Time article cited a handful examples (but there are many more):

— Durham, N.C., recently authorized bow hunting for deer inside the city limits to help deal with an outbreak of Lyme disease and an increase in the number of deer-vs.-vehicle collisions.

— Officials in San Jose, Calif. — yes, in the heart of Silicon Valley — now allow the hunting of wild pigs within the city.

And, when given the opportunity, the modern-day hunter is well equipped for taking on backyard game. We’ve got fast and accurate bows and crossbows that kill game quietly without frightening our non-hunting neighbors or drawing the ire of our anti-gun neighbors (but we’ve also got suppressors where legal). For coyotes and hogs, we can fire up the night vision gear and do our work while the rest of the town sleeps. For decades we’ve been organizing urban bowhunter associations and writing articles about how to kill a “backyard buck.”

It also seems we have the necessary will. A recent study funded by the USFWS reported a 9 percent national increase in hunting participation from 2006-2011. Among the main reasons for the increase, researchers listed: hunting for meat and the locavore movement; the economic recession; and a boost in brand new hunters including female, suburban, and youth participants.

People, even city people, are looking to fill their freezers with healthy, organic meat, and it doesn’t get any more local than the state park down the road.

A Slow Death for Wilderness Hunting?

But what about the geese that don’t live on the golf course? Can we hunt them too? In other words, there is more to hunting — a lot more — than pest control. In many regions, wildlife has flocked to suburban areas, but the actual wildernesses remain wildlife dead zones. Some of this, of course, is due to the fact that suburban and agricultural areas will always hold more food for animals than a wilderness, but part of the reason is due to a mismanagement of our public lands.

See Frank Miniter’s piece on America’s declining whitetail woods. Or simply talk to a big-game hunter who spends time in the backcountry (in places like western Montana, northern Wisconsin, or Upstate New York) and ask him how many animals he’s seen over the last few seasons. Or, maybe talk to one of the waterfowl hunters who lost his hunting spot on a National Wildlife Refuge this year while the federal government was shut down. Or talk to a Midwestern bird hunter who saw 2.8 million acres of CRP land disappear this year.

There’s also the matter of public opinion and legislative support. There are obvious ecological and societal benefits to killing deer in a state overrun with whitetails like New Jersey or Connecticut. But the benefits – while just as important – are less obvious when it comes to killing a mountain goat in the Colorado backcountry (if you unsure of the benefits I’m referring to, please see the North American Wildlife Conservation Model).

Will the non-hunting public and its lawmakers be as supportive when we want to trek into the wilderness to hunt mule deer, moose, elk, bighorn sheep, wolves, or grizzlies? Or, does that support only extend as far as the city limits?

Maybe for now we should just be happy with the way things are and be thankful for the Time story, the increase in game populations, and the growing interest in hunting.

But, at some point we need to remind the non-hunters, and ourselves, that hunting at it’s best is an exercise in reconnecting with nature, not simply a method of culling it.