Is the Farm Bill Really Good for Hunters?

The biggest news in conservation this week is the presumed passage of the 2014 Farm Bill, a monstrous, acronym-filled jumble... 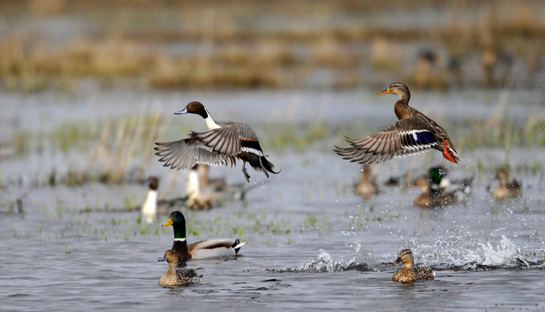 The biggest news in conservation this week is the presumed passage of the 2014 Farm Bill, a monstrous, acronym-filled jumble of commodity programs, Food Stamps, consumer protections, and wildlife-habitat provisions that adds up to about $1 trillion over the next 10 years.

A bi-partisan conference committee approved the details of the bill late Monday night and forwarded the legislation to the House, which is expected to pass the bill within weeks before passing it over to the Senate (where its reception is less certain). This is a big deal, since the 2008 Farm Bill has been crippling along with emergency extensions since it expired in 2012. And without a real bill, federal programs are frozen, which means no new wetlands are being conserved, no new CRP contracts are being let, and no new prairie potholes are being protected.

Any changes to a program with this much complexity take time to digest, but we got insights from a group of conservationists with one foot in Washington, D.C. and the other foot in America’s wetlands and grasslands to help interpret the contents. Here are some highlights from the Theodore Roosevelt Conservation Partnership, Ducks Unlimited, Pheasants Forever, and from the Association of Fish and Wildlife Agencies:

• Conservation Funding
For the first time ever in a Farm Bill, funding devoted to conservation exceeds the funding earmarked for commodity subsidies. And because conservation funding generally provides more value — as measured by more ducks in the air, more hunting licenses sold, cleaner water, and healthier landscapes — than subsidies, the next Farm Bill could return more money to the Treasury than it takes.

• Sportsman Access
The Open Fields program should once again incentivize landowners to open their land to hunting, fishing, and other recreation. Some $40 million of annual Farm Bill funding is going to this program that is distributed to states to pay landowners to provide access. Before funding dried up, Open Fields help open about 3 million acres of private land to hunting, especially in Montana (through the Block Management Program) and North Dakota (through the PLOTS Program).

• Conservation Compliance Language
Since the 1985 Farm Bill, conservation groups have made “conservation compliance” a requirement of federal funding. In a nutshell, it requires farmers and ranchers who accept Farm Bill funding for participating in programs such as CRP and Wetlands Reserve Program to prove that their actions on the ground are actually good for conservation. Think of it as a police force for conservation. The big deal in this new bill is that conservation compliance is now linked to premium insurance for federal crop insurance. In the past, because the insurance paid farmers even if they planted crops on marginal land, it incentivized the very sorts of problems that the Farm Bill was trying to fix. Now, if a farmer breaks up erosive soil and their crop fails, American taxpayers aren’t on the hook to pay for it.

• Sod Saver
This is a program that’s designed to incentivize farmers to keep highly erosive soils and landscapes in their native condition. Negotiators could only get Farm Bill conferees to retain Sod Saver provisions for six states in the critical Prairie Pothole region: Montana, North Dakota, South Dakota, Minnesota, Iowa, and Nebraska. But because these states are among those with the most intact grasslands and abundant pressure to convert the prairies to energy development or commodity agriculture, negotiators think the conservation benefits of this program will be huge. The program also reduces the subsidies that producers would get if they tilled up native prairie.

• Conservation Reserve Program
This is a case of good news/bad news. The bad news is that there is only enough funding for 24 million acres of CRP, down from 32 million in the last Farm Bill. The good news is that the money for CRP is more focused, and should be more effective on the ground, by making CRP contracts more closely tied to real-world rental rates (that have been going up with the skyrocketing value of small grains like corn and soybeans). Two million acres of the new CRP funding is targeted to return highly erosive ground back to grass and additional funding is devoted to quail habitat in the Southeast.

Is the Farm Bill good for hunters? If it’s good for wildlife, for healthy landscapes, and for recreational access, then the answer is yes. It deserves your help getting it through the House next week and the Senate later in February.