BLM in Cahoots with The Humane Society of the United States?

It took me longer than it should have. But, eventually, I saw it. The issue beneath the issue. And it... 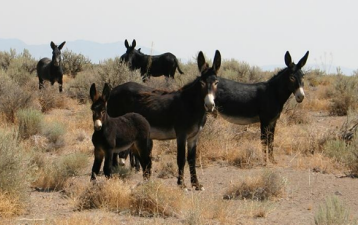 It took me longer than it should have. But, eventually, I saw it. The issue beneath the issue. And it ticked me off…

Outdoor Life Editor Andrew McKean, as he is known to do from time to time, sent me a somewhat-cryptic e-mail about a “possible Open Country blog topic.”

The e-mail contained a string of comments from Facebook in which several hunters were fired up about the killing of two wild burros in Arizona.

It wasn’t necessarily the death of the two donkeys that had sparked their ire, it was the fact that the Bureau of Land Management seemed to be partnering with the Humane Society of the United States on a reward program and, possibly, was in cahoots on a contraception project for controlling the burro population on Federal lands as well.

That’s right, a U.S. Fish and Wildlife Service communications that reads like a partnership agreement with the most rabid anti-hunting organization in the world.

Now, I’m not cold as a stone. I loathe poaching and poachers. I don’t like seeing wildlife killed without reason. I think a reward is a fine thing. But I do not think the folks in charge of managing our national wildlife resources and public lands should be climbing into bed with the likes of HSUS. I’m not saying that’s what’s happening for certain. But while researching the issue, several disturbing things came to light.

This reward is hardly the first interaction HSUS has had with the BLM over the burros on Federal lands.

Turns out HSUS received a $760,000 grant in 2013 from an anonymous donor. The purpose of that grant is to promote the protection of “wild burros” managed by the BLM.

I don’t pretend to know much about much. But I know this: $760,000 is a lot of money. And money talks. HSUS claims there are about 5,000 wild burros, descendants of the mules used by settlers in the 1800s, roaming about the western states. With the grant, HSUS launched the “Platero Project” to ensure the longevity of the species.
And how do they propose to do that?

Well, through contraception and adoption programs of course. . .

The HSUS is railing hard for the BLM to use porcine zona pellucida (PZP) on burros to help control the population. It’s also pushing to implement a “training” program so that wild burros being kept in “federal holding facilities” are more likely to be adopted.
The issue of wild horses and burros in the West is a sticky one and that’s another topic for another day. The Wild Free-Roaming Horses and Burros Act of 1971 directs Federal management of those animals. That management is neither easy nor without controversy.

But do we really want an anti-hunting group like HSUS involved in it? I’m a big believer in science-based wildlife management and the North American conservation model.

I don’t recall any of its tenets involving contraception or the “breaking” of a wild animal so that it can be adopted as someone’s pet.

Are those horses and burros wildlife or not? If they are, should we be using contraception and adoption to control their numbers? Perhaps that’s what we should do with deer and elk as well.

Don’t think for a moment that this isn’t precisely what HSUS is angling for. And what is this Humane Society Wildlife Fund Trust?

Well, it’s another branch of HSUS with the goal of securing land for “wildlife sanctuaries.” And the first rule for every property in the program? You guessed it: “On these safe havens for wild animals, recreational and commercial hunting and trapping will always be prohibited.”

Established in 1993, the Trust has kept a pretty low profile as it’s amassed about 100 sanctuaries in 39 states.

We’ve written an awful lot about the importance of access to the future of hunting and fishing. We know that hunters have a voice in what happens on public lands because we are the primary method for implementing science-based wildlife management on those lands.

HSUS knows that as well.

McKean’s e-mail to me about a potential blog post involved a conversation about HSUS teaming up with BLM to offer a reward for a coupled of illegally-killed donkeys.

But that issue is not the issue. And that reward doesn’t have much to do with finding a poacher. The Human Society Land Trust isn’t about “preserving habitat.”

And this HSUS push to partner with the BLM isn’t about sterilizing a few burros.