An Access Manifesto: Trading the Places You Have For the Opportunity You Lack

Spoilage. Remember that word from high school economics class? Spoilage refers to the goods or services we have but couldn’t... 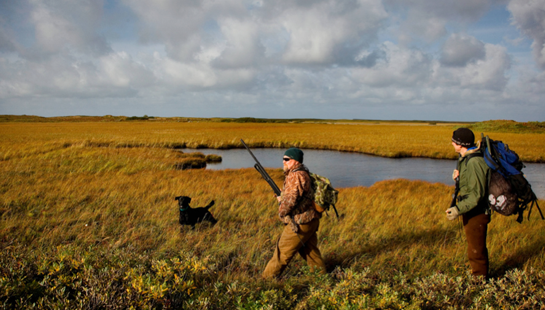 Spoilage. Remember that word from high school economics class? Spoilage refers to the goods or services we have but couldn’t or didn’t consume before they expired: the airplane that leaves the ground with empty seats or the hotel that lets a night pass with vacant rooms. It’s waste, like brown bananas in the produce aisle.

The access problem in the outdoors is caused by spoilage, not a lack of acres. I propose we call the problem “Latent Access,” and that we get busy fixing it.

“Access to quality hunting and fishing ground is the most significant challenge facing the future of hunting,” says Doug Saunders, VP of Marketing for the National Wild Turkey Federation. “Organizations like ours and government agencies can only do so much. The largest impact needs to come from private individuals sharing their access.”

THE MATH IS CLEAR
According to the National Shooting Sports Foundation, 45 percent of sportsmen say they would take more trips if access challenges weren’t standing in the way. The outdoor industry is chock full of people, companies, and organizations that know access is a problem and want to do something about it. Outdoor Life’s Open Country program is one of the highest-profile efforts to address and solve the problem, which is why I’m writing in this space.

U.S. Fish and Wildlife data tells us there are 33 million anglers and 13 million hunters in the United States. Seventy percent of hunters also fished, making for 37 million total sportsmen. These folks got out 711 million days in 2011, of which the NSSF estimates roughly 60 percent were on exclusively private ground. (2 people on a 2-day fishing trip is 4 “days”) That adds up to 283 million public or “some public” days and 528 million exclusively private days.

Americans hunted and fished 528 million days on exclusively private ground in 2011. If each person took someone new the outdoors, filled additional seat in their blind or took just one person to their turkey spot every tenth time they went, that would increase days afield by 52.8 million. That’s an increase of 7.4 percent in one year.

I believe we need to continue to fight for acres. We cannot ease up on the political and social movement around public access for which our NGOs, federal and state organizations, and many of you have fought so hard to achieve.

YOUR ROLE IN THE PROBLEM
With so much of the attention on acres, we aren’t giving proper credit to one of the biggest problems: you and me. The math is clear; we can only solve the access problem by decreasing the Latent Access in our own lives.

Some of the most desirable places to hunt and fish are often the most private. That’s part of the appeal, right? Having a place to call your own—to manage the way you choose, to hunt when you want. To invest in and care for productive land remains one of the great goals of a modern sportsman.

But the following scenarios have become commonplace:

EXHIBIT A: THE DEER LOCK-OUT
Group A has a deer-hunting lease on 160 acres in Kansas for which they pay a hefty fee in return for an expectation that the landowner will help protect their “investment” by letting no one else hunt. At the end of the day, it’s only a deer lease. No one hunts light geese in March, or the toms that strut their way through April mornings. No doves are taken the 1st of September, no does are culled, no predators hunted. In effect, 160 acres have been “taken away” from the broader body of sportsmen, so that a couple of people can hunt for a couple of days.

EXHIBIT B: THE DUCK CLUBBERS
Group B has a duck club. They’re duck-loving diehards. They love breakfast and stories in the blind just like anyone else. They do it right — get in early, stay all day, shoot no more than their limit and take joy in preparing the meat for their families. They’re sportsmen. It also happens the jobs that afford them the luxury of a good duck lease prevent them from using it all but a couple of days of the year. Most days, including many of the best days, the blinds sit empty.

This is Latent Access in action, and it is hurting hunting and fishing numbers in ways public-land managers, government organizations, and non-profits cannot repair. It’s a complex problem: It’s hard for people to find a place to hunt or fish, and it’s hard for those who have it to share it.

SELLING, DONATING AND TRADING ACCESS
If you’re still reading this, you are probably fairly frustrated by now. And you may be calling me a socialist, or a Democrat. Or worse. That’s your deer lease, right? You did the work. You paid your dues at work so you could afford to pay your way and now some guy is telling you that you’re part of the problem? I share your sentiment because I’m part of the problem, too. So is everyone who has worked hard to earn an exclusive hunting or fishing spot.

But if you consider the bigger picture, there are solutions that respect your effort and property rights. And solve the problem of access that threatens to atrophy our rich outdoors traditions.

First, decide if you’re going to perpetuate a hunting or fishing legacy. Do you believe hunting and fishing are important enough to preserve? It’s a personal decision that requires individual action and responsibility.

If your answer is yes, you need to do a couple things:
1. Assess your inventory. What access do you have that you do and do not use? Are there empty seats in your duck blind on the days you don’t go? How about on the days that you do go? Could you bring a new person to hunt with you? If you love to fish and own some ground because it has a pond on it, could you donate a dove hunt to a youth organization?

2. Have you—personally—introduced your passion to a new person this year? Could you? Could you leverage the access you’ve secured to give a new person, young or old, a taste of what it feels like to get out? Americans spent 711 million days afield in 2011? You were out about 20 days last year, if you’re near the average. What if every tenth time you went out on private ground you brought someone new with you? Remember, just 1 out of 10 days on private land would add more than 53 million days in the field to the total, raising participation, and thus “access,” by more than 7 percent.

Legacy building is never simple. The National Wild Turkey Federation proclaims, “Save the Habitat. Save the Hunt.” Other organizations like Rocky Mountain Elk Foundation say, “Hunting is Conservation.” But no government, no state organization, and no non-profit can do what you can do with just 1 out of every 10 trips you take.

They’re not talking about you. You already hunt.

Four and half out of every ten people who hunt or fish would go more often if they had better access. That means you know lots of them. NWTF, RMEF, and countless other organizations are talking about you doing the very personal work of saving hunting and fishing, not just going hunting or fishing yourself.

One extra person every tenth time you go. This is how we move the needle on hunting and fishing access in America.

Eric Dinger is the CEO of Powderhook, an online access community