Photo by fly-fish.com What happens when a state game commission blatantly works against the rights of sportsmen and women who... 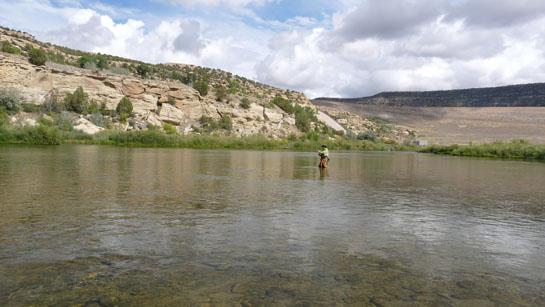 What happens when a state game commission blatantly works against the rights of sportsmen and women who help fund it?

Let’s look to New Mexico where another question is being asked:
May a private landowner exclude others from fishing in a public stream that flows across the landowner’s property?

And now, the answer:
No. A private landowner cannot prevent persons from fishing a public stream that flows across the landowner’s property, provided the public stream is accessible without trespass privately owned adjacent lands.

It is an answer so clear and free from ambiguity that it’s hard to believe it was written by attorney.

But it was. In fact, it was written by an attorney named Gary K. King, who happens to be the Attorney General for the State of New Mexico.

And this opinion has big-time meaning for anglers in the Land of Enchantment.

“We were pretty shocked by the opinion. It was very unexpected,” said Joel Gay, Communications Director with the New Mexico Wildlife Federation. “But what was just as surprising is the fact that the opinion was formed based on a Supreme Court ruling from 1945. That’s more than 70 years ago. So why have we not been following this law? Why has our Fish and Game Commission established regulations that make it illegal for anglers to fish those rivers and streams that cross private lands?”

All good questions. But here’s an even better one: Given the clarity of King’s opinion, will the New Mexico Game Commission rethink its regulations and bring them into line with a law first established by the New Mexico Supreme Court in 1945 and now reaffirmed by Attorney General King?

“The silence (from the Game Commission) has been deafening,” Gay said. “When we read the opinion it certainly does seem very, very clear. The Supreme Court, which is a pretty high authority, declared in 1945 that fishing in public waters that pass through private lands is not trespassing. Yet we have not yet been able to get a response to this opinion confirming the Supreme Court’s position from the Game Commission on whether they will bring their regulations into compliance.”

As is often the case with such things, there’s a bit more here than meets the eye.

In State ex rel. State Game Commission vs. Red River Valley Company the Supreme Court was asked to determine whether anglers fishing in the Red River where it passed through land that was privately-owned were trespassing. The Court ruled that, in fact, the waters passing through those lands – and the fish those waters contained – were publicly-owned and thus open to public use, including fishing.

In its ruling, the Court stated: “the waters in question were, and are, public waters and the appellee (landowner) has no right of recreation or fishery distinct from the right of the general public.”

In simple terms: The landowners own the land. Not the water nor the fish. And have no legal grounds for keeping anglers off the river.

The position was, of course, appealed on the basis that the landowners owned the land beneath the river and thus should be allowed to prevent anglers from wading on “their” land.

Again, the Supreme Court denied the notion stating “on consideration of motion for rehearing, our conviction as to the correctness of the result reached in the majority opinion is not weakened, but strengthened rather.”

I’ve read a lot of political jargon regarding issues of public access on public waters. And I can’t say that I’ve ever read a Supreme Court ruling that was so emphatic in its position – and I know I’ve never read an Attorney General opinion that was as clear-cut and undeniable as that which was issued by New Mexico’s Attorney General this month.

The opinion is exceptionally clear. Wading and fishing in public waters, even if they pass through private lands, is not trespassing. Yes, you must remain in the water and access from a public point. But once in the water, you are free to fish where you want.

And yet for more than 70 years – in spite of the Supreme Court ruling – the New Mexico game commission has declared it illegal for anglers to fish on rivers and streams that pass through private lands without landowner permission.

On page 7 of the current New Mexico Department of Game and Fish Rules & Info booklet there is a section on recreational trespass that states “It Is Trespassing If . . .A person enters private property that is legally posted and they do not have written permission to be there. This includes stream and river bottoms located in private property.”

Gay said it’s important for anglers to remember that the New Mexico Fish and Game Department does not set the regulations. That’s the task of the New Mexico Game Commission, a 7-member panel appointed by the Governor.

Yes, it will be up to a group of political appointees to right this wrong. And that’s precisely what has groups like the New Mexico Wildlife Federation concerned.

Kienzle served on Martinez’s campaign committee during her bid for Governor. He’s also an attorney who represents The Paragon Foundation, a New Mexico nonprofit organization dedicated to private property rights and limited government and a member of the Mountain States Legal Foundation, and is a member of the conservative nonprofit Mountain States Legal Foundation, another group known for promoting the protection of private property rights.

“So, yes, you could say we are a little bit concerned about what the Commission will do with this,” said Gay.

Attempts to contact both Kienzle and Commission Co-Chair Bill Montoya were not immediately returned.