It was both symbolic and necessary. More than three dozen volunteers had gathered an impressive pile of barbed-wire fence and... 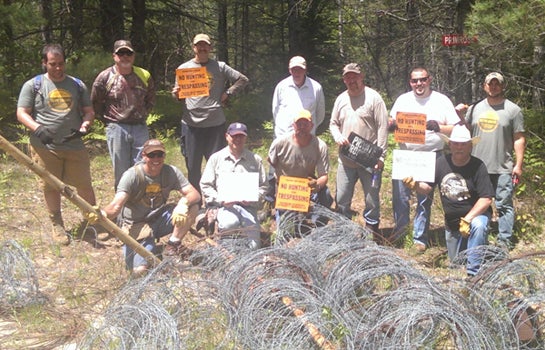 It was both symbolic and necessary.

More than three dozen volunteers had gathered an impressive pile of barbed-wire fence and paused for a few photos at the end of a long but productive day.

That fence was not only an eyesore and a potential hazard for those using this 640-acre tract of the Pigeon River Country in northern Michigan, it was also some of the last remnants of a barrier that no longer belongs.

“This is public land and removing those fences – nearly two miles of it – felt pretty good,” said Drew YoungeDyke, grassroots manager for Michigan United Conservation Clubs. “It was a lot of work. But no one complained. This is what we came here to do.”

The fence removal was just one part of the access-enhancement project that brought together Michigan On The Ground program , a public/private partnership between MUCC and the Michigan Department of Natural Resources, the Rocky Mountain Elk Foundation, Outdoor Life’s Open Country program as well as members of the Pigeon River Country Association and Americorps.

The group removed the aforementioned fence and also pulled down an array of old No Hunting signs, remnants from the days when the land was privately-owned.

The area of focus, known as the Hackett Lake Tract, is a 640-acre parcel that was purchased by the Little Traverse Conservancy in 2007 with help from RMEF. The state of Michigan then acquired a conservation easement though the Michigan Natural Resources Trust Fund which uses state-owned oil and gas royalties to buy public recreational land.

“This is the ideal example of how partnerships should work,” said YoungeDyke. “Every group played a role and worked together to create not only new public access but pretty high quality public access in the heart of Michigan’s elk country.”

Outdoor Life proudly awarded the effort a mini-grant through its Open Country program [ submit your proposal here ]. And how was the funding put to use?

“I can tell you the funds were put to good use – and will continue to be put to good use,” YoungeDyke said. “These projects are volunteer-driven. Having the ability to provide them with lunch, to help cover some of the costs of local groups like the Black Mountain chapter of NWTF makes a difference. Those small, non-profit chapters want to work. They want to do more. But they are often limited by budgets. In this case, we were able to do the project and will be able to continue work here thanks to the mini-grant program.”

The project was a continuation of efforts started in 2011 when an RMEF-led workday started removing some of the debris, abandoned buildings and assorted junk piles left from the days when the land was privately-owned.

RMEF members Dan Johnson and Doug Doherty played an instrumental role in the planning of the project and received plenty of help from Scott Whitcomb, the Michigan DNR’s Pigeon River Country coordinator.

The Hackett Lake tract project won’t be the last you hear from Michigan On The Ground program here on Open Country either. The program has several more projects planned for this summer.

Want to get involved? Stay tuned and we’ll provide details on upcoming efforts.