One Veteran’s Story: I Fought for Public Land

For four years, Brett Ross longed to get back to deer camp. Each October for three generations, his family had... 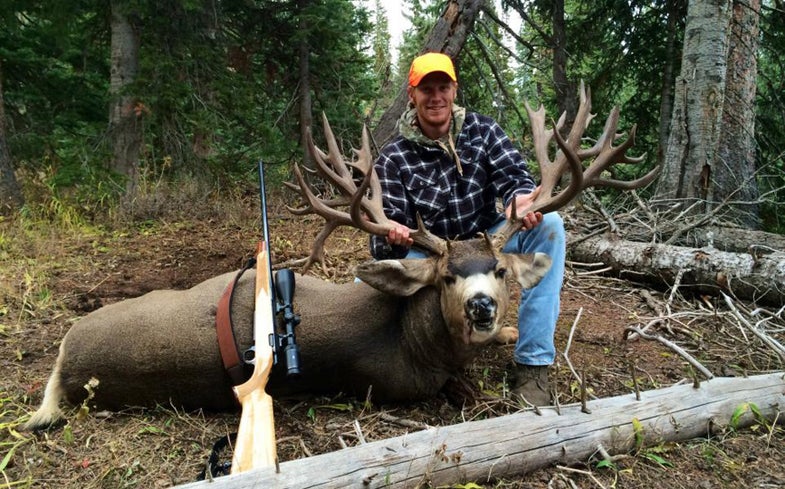 For four years, Brett Ross longed to get back to deer camp. Each October for three generations, his family had set up tents in this exact place on public land—the Mesa Flats in Colorado, one of the largest flat-top mountains in the world—to hunt deer and elk. Their goal was a modest one—get some meat for the freezer. Antlers really never entered into the equation. Neither did the war in Iraq.

Ross had joined the Marines in an effort to fight terrorism, but it was after his deployment that he realized he also fought for something more personal.

“Our public lands,” says Ross, a former Marine Corps infantryman. “They tie in to what I was fighting for as much as anything else. I fought for our public lands—places where we hunters and our families can make memories that we can cherish forever.”

Talking about hunting, receiving photos from his family back home, and eventually getting back to hunting camp is what inspired him.
“I was actually discharged the evening before the general Colorado hunting season—and I went right from the airport to the woods,” says Ross. “I didn’t have any time to get my gear or clothes together and had to borrow everything from my buddy, Levi, but I made it to camp and got to eat my dad’s cooking again—he’s the greatest camp cook ever.”

A blown opportunity at a young bull elk the next day did nothing to hamper Ross’ enthusiasm for being back in the place he felt grateful and blessed to be part of again.

Last fall, Ross’ family and friends were all on hand for the annual hunt. After an unsuccessful morning and a brief lunch, Ross, his fiancé Kirsty, and best friend Levi headed out from camp for the afternoon.
The trio of hunters spread out as they walked along, but after getting about three-quarters of a mile from camp, Ross saw his buddy waving him over his way. Closing the distance as quickly as he could, Ross arrived just in time for Levi to point off in the distance and whisper, “There’s your buck!” As the only hunter with a buck tag, Ross would be taking the shot.

“All I could see was 3 points,” says Ross. “But I’m a meat hunter and knew that he was legal so…”

Boom! The rifle shot echoed across the mountains and Levi and Ross briefly celebrated the fact that once again they would bring venison back to camp. Soon they began their hike down to where they eventually spotted the buck, still thrashing inside the tree line.

“As we were getting closer, Levi could see the buck through an opening in the trees, but I couldn’t,” explained Ross. “And as we’re walking down he keeps grabbing his binoculars and yelling, ‘You shot a toad, you shot a toad!’ He’s been my friend since we were 13 years old, and I’d never seen this level of excitement from him.”

Continuing down the hill, anxious to see what Levi was so excited about, Ross finally stepped into view of his deer.

“I immediately dropped to one knee and put my hand on the ground and all I could say was, ‘Oh my God, oh my God.’ I could finally see what I’d shot, and I had thought it had three points, but now it had antlers going everywhere… It was just surreal. I thought that at any moment Ashton Kutcher was going to jump out of the bushes and say ‘You got punked!’”

It was no prank. Back at camp, Ross’ fiancé, friends, and family were all in awe of the giant mule deer. But it’s the reaction that Ross got from his dad that seemed to stick with him the most.

“I had only seen that expression on his face twice before. When I graduated boot camp, and the day I came home from Iraq. I was just so excited to show the man who taught me everything about hunting my bloody hands and what I’d just killed.”

Ross eventually got his Colorado buck scored by an official Boone & Crockett measurer, and the net score came in at just over 292 inches. As for the future, despite having a world-class deer to his name, Ross doesn’t plan on changing his way of hunting.

“The first legal thing I see, it’s going to be extremely hard to pass up,” Ross explained, “I’m still going to be a meat hunter. I got the meat. All the rest is extra.”

Including being back with him family on the public land that he fought for as a Marine.