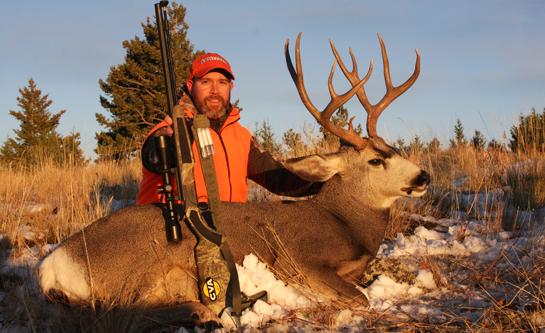 “If you’d shoot it on the last day, shoot it on the first.” These words, which have been recited to me on more than one occasion–and which I have subsequently offered as advice to others–looped in my head as I stood on a gravel road in central Montana, 113 yards from a mature, 4×4 mule deer. My plane had touched down in Great Falls less than three hours earlier and I still had three full days of deer hunting ahead of me.

It’s a good problem to have, trying to decide whether to attempt to end a hunt before it really even starts, but making that decision never seems to get easier. The last time I was faced with it was on a whitetail hunt during the Illinois muzzleloader season three years ago. A very respectable high-130s-class buck ambled by my stand at about 25 yards just minutes before the end of legal shooting light. It was the second night of that hunt, but I had still three more days to try and seal the deal on one of the true studs that western Illinois has come to be known for. The next mature buck I saw that week came into view 30 minutes before I left my stand on the very last night, and no amount of calling, wishing, or telepathic pleading would bring him closer than 250 yards. I wasn’t comfortable trying to make a shot on that buck at that moment, and all I could think about was the deer I had passed up earlier in the week.

So there I stood on that gravel road in central Montana three years later. The muley fed in a pasture, fully aware of our presence but seemingly without a care in the world. My buddy Chad helped me run through the pros and cons of attempting to take the deer. PRO: He’d been scouting hard and felt that this was one of the five largest bucks on the ranches he leases, and that the deer was either 5 or 6 years old. CON: There were bigger bucks. PRO: This particular buck had disappeared onto the neighboring ranch for the past few days, but here he was again. CON: If I shot him, would I feel like I hadn’t “earned” the buck? PRO: The deer was standing broadside at just over 100 yards. CON: Ummm. PRO: There was virtually no wind to affect bullet flight (once again I was hunting with a muzzleloader), and that’s a rare thing for central Montana. It could very easily blow 30 miles per hour for the duration of my hunt, not only increasing the difficulty of any shot beyond 50 yards, but also putting all the deer on high alert. CON: Uhhhh. PRO: If I shot and killed the buck right then, we’d have time for photos and still make it back to the house in time to watch my beloved Red Sox try and win another World Series. CON: Yeah, I got nothing.

So I grabbed my gun out of the back of the side-by-side and inserted a primer into the breech plug. I waited for the deer to face away from me and then slid under the barbwire fence. I scooted down the hill a bit, extended the legs on the bipod, found the deer’s vitals through the scope, cocked the hammer, and pulled the trigger. I lost sight of the buck in the resulting smoke but heard the bullet hit its mark, and judging from Chad’s and his son Wyatt’s reactions behind me, I knew it was safe to start digging the tag out of my pack.

Hunting is funny that way. You can spend months managing your property, setting stands, analyzing deer movement via trail cams photos, and if all goes according to plan you’ll be wrapping your hands around antlers on the morning of opening day. Or maybe you save for years for a backcountry elk hunt, spend all summer getting in shape, and then, as you’re hiking out in the dark on that first morning, a big ol’ bull bugles just above camp. We prepare ourselves, both mentally and physically, for a variety of possible outcomes to our hunts, and when a best-case scenario presents itself we can hardly believe our good fortune.

Do I regret not holding out for a bigger deer? Not a bit. Do I feel like I didn’t “earn” this buck? Well, I’ve certainly hunted harder for animals; after all, I was still picking airline peanuts out of my teeth when I pulled the trigger. But in the end, I made a good–albeit not very difficult–shot on a mature deer, and as a result, my wife and I will enjoy the meat from it for months to come. To me, that’s better than being haunted by the sight of him feeding in a pasture at 100 yards as I stuff another un-punched tag into the drawer of my nightstand.