Illustrations by: Pat Kinsella Seated comfortably in my friend Dave’s sleek little 13-foot fishing boat, we left the dock on... 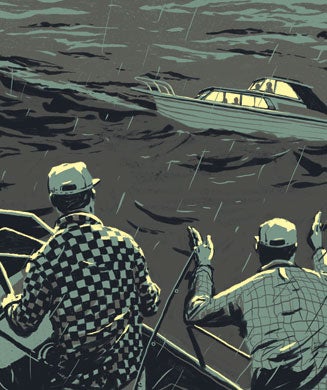 Seated comfortably in my friend Dave’s sleek little 13-foot fishing boat, we left the dock on a calm day full of blue water, blue sky, and even some picturesque white clouds towering far to the north.

I was there to fish, of course, but also to photograph the excursion, so I was particularly pleased with the clouds. In fact, my only concern was Dave’s mushy speculation about the best area for us to go to in search of fat walleyes. “I’ve got this feeling they’ll be hanging out at the upper end of The Narrows,” he muttered. I vaguely remembered that the lake was still a river at The Narrows.

That phrase, “upper end of The Narrows,” should cause any boater a brief quiver, especially one aboard a boat the size of a living-room sofa. There is something about the word “narrows” itself that sends a chill down my spine. I have shot narrows by means of canoe, rubber raft, and a variety of other craft, sometimes even on purpose. On one occasion, I made an unscheduled trip through a narrows with only a life jacket for company.

Since I was along only as a guest on this particular outing with Dave, I refrained from offering an opinion about the proposed trip through The Narrows. Instead, I kept my attention focused on the clouds, which seemed to be making steady progress in our direction, casting deep shadows over the mountains to the north. Their approach, I thought, would enhance my photographic opportunities enormously. Even better, I could make out some distant whitecaps. Blue sky, blue water, whitecaps, and white clouds: What more could a photographer ask for?

As we entered The Narrows, I spotted a bald eagle perched at the top of a tall snag next to the river. Before I could get my camera focused on him, he took off in the opposite direction of the approaching clouds, which had now turned from fluffy white to ominous gray. Dave didn’t say anything about the clouds, but instead he muttered something about how flighty eagles can be when humans approach their best fishing grounds.

Three hours later, Dave stood on the wave-blasted dock, his quivering hands resting on his soaking hips, his wet hair plastered down on his hatless head, and uttered those classic words of small-craft fishermen everywhere: “I’m going to buy a bigger boat!”

Escape from the Narrows
Here, I think, is the reason for that statement. When that huge, black, billowing storm reached The Narrows, it squeezed itself tightly together so that it could fit all of its power into that confined space. The best thing I can say about Dave in that situation is that he did not scream.

Once miraculously free of The Narrows, we headed down the lake, now churned up by what was shaping up to be a major storm. We headed for a distant dock. I was sitting on a hinged hatch cover over a storage bin of some kind. Every time we hit a wave, the hatch cover and I would fly up about 6 inches and then crash down, jarring bones, teeth, and the contents of the hatch.

As we pounded our way inch by inch and wave by wave through that storm, chilled to the core from water bursting over the bow of our classy little boat, cabin cruisers zoomed by us on top of the waves. Through their large windows we could see the occupants strolling about with drinks in their hands, chatting amiably with one another: “Storm? What storm? Any more of those little cheese thingies?”

That, I think, is why Dave proclaimed his intention to buy a bigger boat.

I shouldn’t have been surprised. You see, several years before, I had stood in that very same little 13-footer after a faith-rattling storm and made exactly the same pronouncement: “I’m going to buy a bigger boat!”

And I did. I sold my sleek little boat to Dave and bought a cabin cruiser. It wasn’t a monstrous boat–not an Ernest Hemingway type of cruiser designed to catch swordfish and marlin and hoist them in over the stern–but it was big enough. It had a cabin with padded seating, a table, a captain’s chair, a console full of gauges, and, somewhere down in the interior, a powerful, gas-guzzling engine. That boat zipped through storms like nobody’s business.

But here’s the thing. I soon discovered I was a small-boat person after all. Sure, it was fun to zoom by small-boat people in a storm, but eating all those cheese thingies can get boring.

Everything about that big boat bored me to pieces. The reason, I guess, is that I’m a small-fish person. I felt really stupid, standing in the stern of that immense cruiser, fishing for puny perch. So after a year or two, I sold the boat. I wish now I had kept it for a while, because then I could have sold it to Dave. And Dave himself, apparently, has my classy little 13-footer up for sale. I wonder how much he’s asking for it.

Fishing Gear
boat
out there