As my buddy Paul and I rigged our first eels of the night, I watched my dad thread a 9-inch... 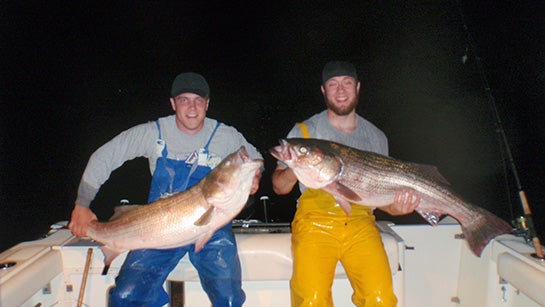 As my buddy Paul and I rigged our first eels of the night, I watched my dad thread a 9-inch Slug-Go onto a jig-head. I was confused, because I thought we had plenty of eels in the live-well. When it comes to stripers, live bait–especially live eel–almost always trumps artificials.

“Don’t you want a hook for an eel, Dad?” I asked, lowering my own slimy bait into the water.

“No, you boys fish the eels. I didn’t grab too many and they’re the best bait we have. I got them just for you guys.”

I had high expectations when I invited my fellow Outdoor Life intern, Paul Kemper, to join me and my old man for a night of striped bass fishing on Block Island, R.I., two weekends ago. Over two days of fishing before our own trip, my dad and his buddy hauled in more than 40 fish between them. This would be Paul’s first striper trip, and I was anxious to show him what he’d been missing. Paul is a Pennsylvania native and a total fish nut, but his landlocked hometown has limited his saltwater fishing opportunities.

Paul caught a train from Manhattan out to my hometown of Wilton, Conn., to meet me. After a 75-minute drive up I-95 and several anticipatory high-fives on the boat, we were cruising out of New London Harbor.

We spent much of the late afternoon baiting fluke rigs with squid strips and shiners. Our three-man crew hauled up small sea bass and porgies, and Paul even landed a small shark (his second ever) and a stingray (his first ever). But really, we were waiting. We were waiting for the sun to drop and for the full moon to rise, so we could start hunting the nocturnal beasts we’d come to wrangle.

As the evening progressed, we put away the ultra-light fluke rods and got rigged up to live-line eels. The cool air rolled in with the fading light as we shared a round of beers and sandwiches, and my father began to look like a linebacker who just got the blitz call. It was striper time.

Perhaps the most exciting thing about striper fishing is what I call “the turn-on.” You can spend hours fishing without a nibble when, all of a sudden, the fish decide they’re hungry. And until they’re full, the stern transforms from a small-talk location into a bunker of shrieking lines, laughs, and pure mayhem.

Combine open-bait live lining with the turn-on, and your adrenaline levels skyrocket. You can feel the fish grab the bait, and you have to force yourself to wait before slamming hook into jaw.

When my dad landed the first fish on his Slug-Go–a beefy 28-pounder–I looked at Paul and gave him the nod. This was it. We spent the next three hours dropping eels and coaching them to “swim into a cow mouth,” landing ourselves striper after striper. Paul caught his first striped bass ever, which doubled as the biggest fish he’s ever caught. I scored the fish of the night: a 41-pounder that turned me into a barbecue hero the following week. When the clock hit midnight and the fishing slowed, we howled up at the supermoon like werewolves.

My father didn’t say anything. I turned to look at him. He was just sitting there, rubbing his hands together and grinning.