Big Bucks: The Tyranny of Score

I’m not a trained deer scorer, but working for Outdoor Life I see a ton of bucks each season and... 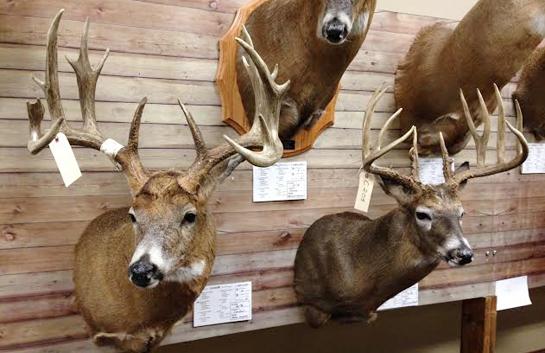 I’m not a trained deer scorer, but working for Outdoor Life I see a ton of bucks each season and it’s our job to track down their story. Part of that involves getting the score. By running down these trophy bucks each year, I thought I had a pretty good handle on eyeing up a buck and estimating its score.

But then I spent three days hanging out behind the scenes in the scorers’ room and the Deer and Turkey Expo in Illinois. There were about 11 official scorers measuring hundreds of trophy bucks for the big buck competition. Most of the time I could eye up a typical buck and get within 10 or so points of its score. But some bucks absolutely threw me for a loop.

I found out that when an average deer hunter (like me) eyes up a buck and estimates its score, many times he’ll end up way, way off. For example, the two bucks in the photo above. The buck on the left is clearly carrying more bone than the one on the right. He has heavier antlers, and it seems that he has higher tines. He should have a higher score, right?

After talking with the expo scorers for awhile, I found out why… In both cases, the bigger looking bucks on the left obviously got hurt by deductions. The extra stickers and and forks are cool, but they kill the score when it comes to symmetry. Also, while both bucks on the left are “heavy” they are not especially wide. Heavy racks can look like they are going to score higher than they actually do.

The takeaway? It’s probably a bad idea to use score as a benchmark for whether a buck is a “shooter” or not. In both photo series the buck on the right outscores the buck on the left, but I would bet my deer rifle that if you polled your hunting buddies they would all prefer to shoot the buck on left (they probably wouldn’t guess that it scores lower either).

After all, score is just a number and as one of the veteran measures at the expo eloquently put it: “Big is big.”