New Caller? Leave Your Shotgun Behind for an Educational Turkey Hunt

“What are you doing?” Phil Bourjaily sounded mildly alarmed. We were lurking in the shade of a fence row somewhere... 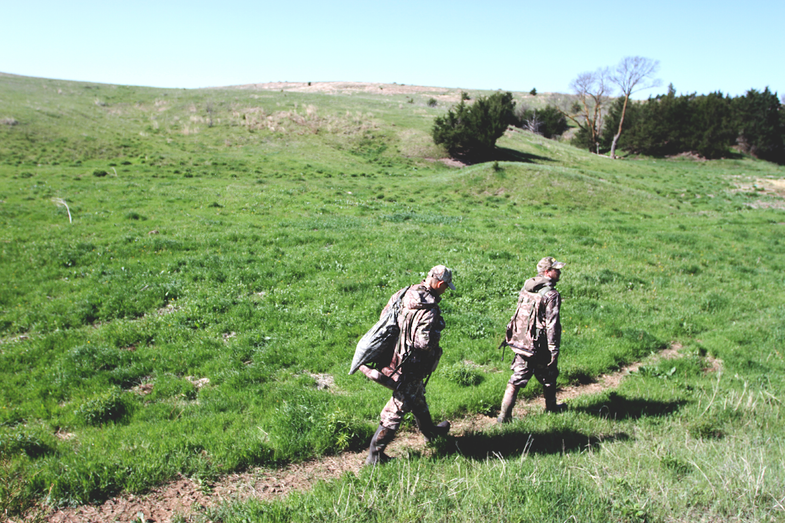 “What are you doing?”

Phil Bourjaily sounded mildly alarmed. We were lurking in the shade of a fence row somewhere on the outskirts of Nebraska’s Sandhills. The strutter around the corner had brought us sprinting 100 yards to intercept him before he rounded the last post. Now I was stretched on my belly, working my box call and hoping to draw him into our line of sight.

“Purring,” I whispered back, still dragging the paddle across the lip.

Trial Run
I chuckled into my face mask and switched back to the strangled yelps I’d been striking for the past few minutes. The tom wasn’t gobbling, but he inflated and made a half-hearted pirouette each time I called. Eventually he worked away from us. So did a hen that had been concealed behind our bushes. I handed off the call and Bourjaily played a series of convincing cuts as they left. One last strut, and they disappeared down a draw.

The encounter proved part disappointing, part satisfying. I failed to call the longbeard into position. But he was still moderately responsive even with a hen by his side. And we could have killed him, we reasoned, if only we’d crawled to the corner and peeked around it.

Of course this is all theoretical. We didn’t have our guns with us. Or tags, as we had both taken birds the previous day. We were hunting turkeys, yes. But killing them wasn’t on today’s agenda.

Speaking the Language
Bourjaily stood and brushed himself off. We reviewed the setup as we walked back to collect the third member of our hunting party. Twenty minutes earlier we’d taken off at a run, unknowingly abandoning our buddy Newt Borowski of Cabela’s while he was busy glassing at the back of the line. The three of us had spent all morning—and an unusual amount of energy for hunters who weren’t planning to kill anything—clambering up hills and searching clearings for turkeys. The idea was to field test my calling. I’d been sputtering on a mouth call back at camp, but I needed real birds to practice on. 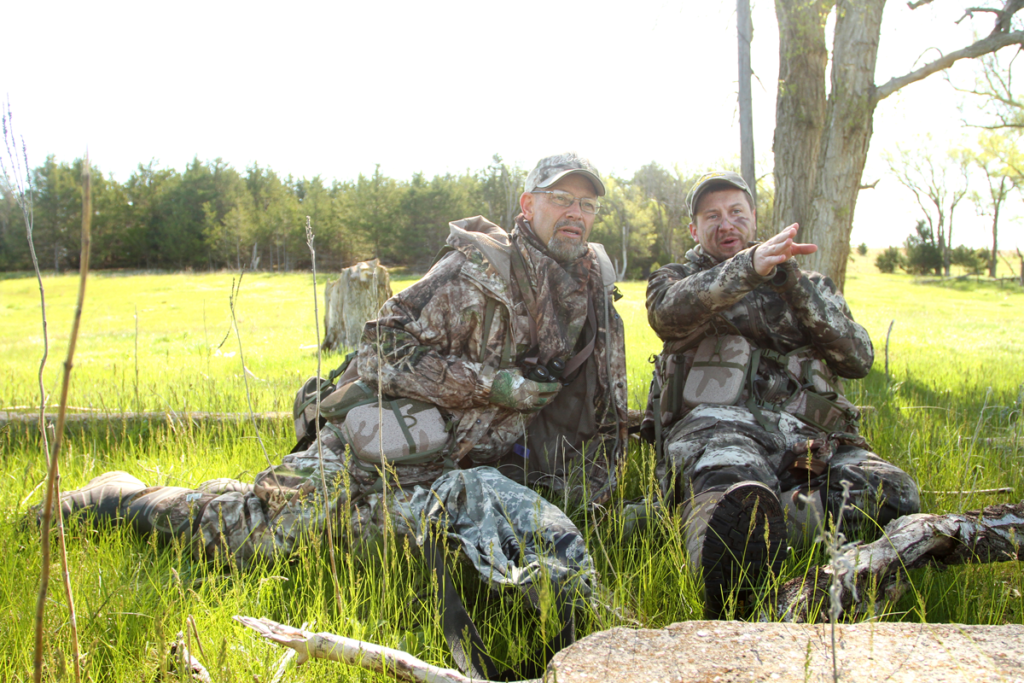 Bourjaily (left) and Borowski glass and talk strategy while watching a lone jake.

Our first attempt that morning had been more fruitful. Borowski guided us through the sloping canyon while Bourjaily advised me on timing and cadence. My locating yelps didn’t elicit any responses, but I did spot a flock of 15 across the canyon. We hoofed it and set up hastily behind a massive brush pile. A handful of hens marched past with a trio of longbeards and a few jakes. The ladies weren’t interested, but I made the toms strut. After a moment I yelped again. One gobbled. I grinned.

This is a short excerpt from the first calling session. It’s purely audio since we didn’t want to spook the birds, but you can catch a few gobbles. Video by Newt Borowski

I experimented with the pitch and rhythm. I continued to strike much too quickly for Bourjaily’s liking, as he told me later. It’s not that I was calling too frequently—instead I rushed each individual yelp. He said it was irrelevant though: The birds liked it, and that’s what mattered. Once, three earnest gobbles cut me off mid-yelp. Before they returned to their hens we had pulled a strutter and his buddy to 40 yards.

I’d just called in my first turkeys. Admittedly I sounded like a screen door badly in need of WD-40. But that’s besides the point.

Advantages of Going Gunless
Apart from one exhilarating stalk the day before, the turkeys I’d killed this season were fooled by my hunting partner. Jeff Johnston’s slate calls ultimately led to my success in Kansas. Cory Peterson of Hidden Valley Outfitters had called back a pair of longbeards from clear across a cornfield, and I took the shot. These were incredible hunts, each different from the last. But it was time to do it myself.

I would encourage fellow rookie callers to try a similar experiment, if they have the luxury. I know most hunters won’t be persuaded to squander an opportunity by leaving their shotgun at home. It sounds counterintuitive, and I agree in many situations. My most instructive hunting encounters have typically involved taking or blowing a shot at game. But sometimes shooting isn’t an option. 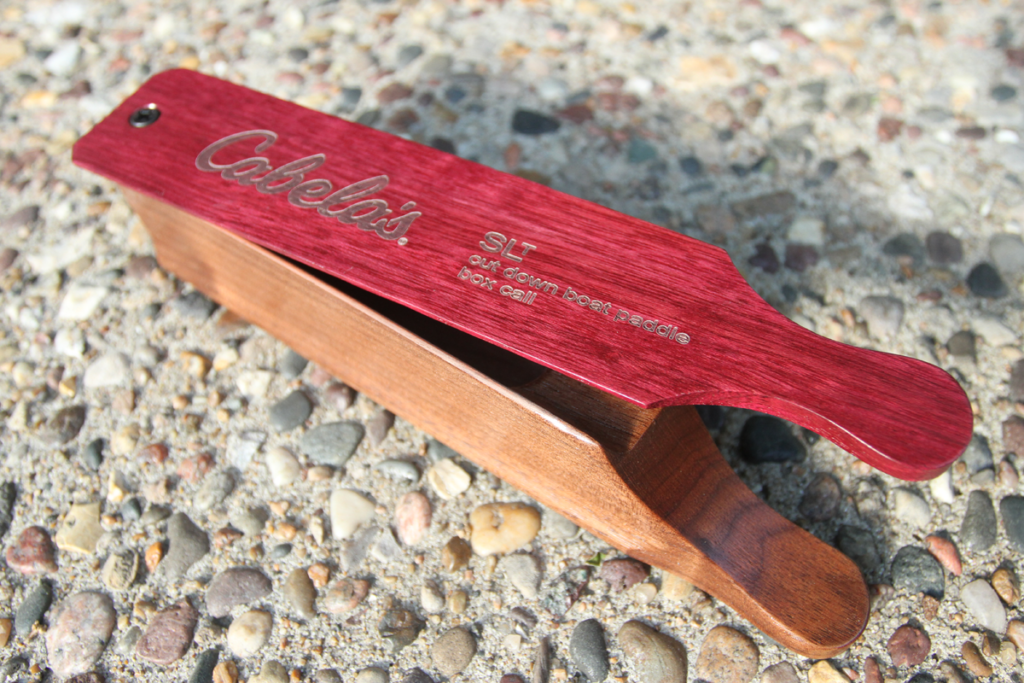 We were hunting at Cabela’s annual spring turkey camp. They supplied me with this box call, which now has a special place on my bookshelf.

Depending on your area, birds will be responsive before the season opens or after it closes. If your state restricts afternoon or Sunday hunting, make the most of those off-hours. And head back to the woods even after you’ve tagged out, like we did. (Note: We were on private land—I don’t recommend trying this on public property during the season.)

Some hunters will argue that we educated those birds. But after observing their reactions, Bourjaily and I disagree. We were never spotted, they never spooked, and there was no gunshot for any surviving birds to associate with our calls. They simply decided the hens they had were a better bet than the one croaking in the brush.

The freedom of going gunless forced me to focus on calling, not shooting. I had no ability, and therefore no pressure, to make a kill. No awkward maneuvering through cover. No target panic. No disappointment at coming home empty-handed. Instead, I was willing to take more risks and experiment. The whole experience was instructive and—maybe more importantly—fun as hell.

Although they’ll require much refinement, I can now produce a basic yelp on the box and mouth calls.

Next up? The slate call. My purring needs work.