Earlier I told you I dismissed whitetails as ordinary. That perspective is rooted in my background. Growing up as a... 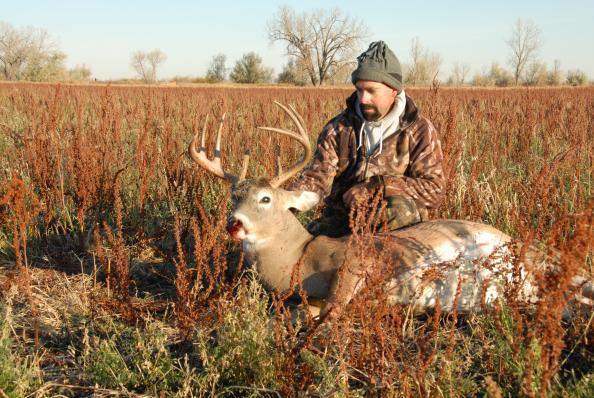 Earlier I told you I dismissed whitetails as ordinary.

That perspective is rooted in my background. Growing up as a Missouri farm boy whitetails were commonplace, and many of my neighbors considered them crop-eating nuisances, not trophy game animals.

But then I moved to Montana’s Milk River Valley, and got serious about hunting whitetails. And my life–and perspective–changed completely. Whitetails may be everywhere, but their very abundance makes the pursuit of an individual an even greater challenge.

My transformation didn’t happen all at once, but a couple of years into it, I can honestly say that my mind is changed. It started with bowhunting a single buck, a light-racked but super wide 6×6, that emerged every twilit evening in the alfalfa field behind my house. I started patterning it, first glassing it from afar then narrowing down its travel routes, schedule and favorite feeding areas. When the archery season opened, I knew I’d kill him.

Only I didn’t. It was like he knew he was being hunted, and if I saw him at all it was in pieces and scant seconds, moving from one piece of cover to the next. We lived together, that buck and I, sharing the same quarter section of land. But it was like he was a ghost. He decided when and where he let himself be seen, not the other way around.

I never killed that deer, but he taught me some fundamental lessons on whitetail hunting: to understand their ability to appear and disappear on a whim, to back off the pressure, and to devote more time and attention to scouting than to actually hunting.

The next year I shot a solid 4×5, an old buck that had joined a group of does and younger bucks in a remote corner of that same field behind my house. I stalked him for three days–from the ground–each evening getting closer and closer to his favorite patch of alfalfa, waiting as he grazed closer and closer into bow range.

Finally, early on a frosty morning, I got into the right place at the right time, and that buck walked into my life. He’s not a giant–upper 130-class–but he is the best bow buck I’ve shot, and the chess game we played gave me a whole new appreciation for the savvy of whitetails.

I have another perspective on whitetails that grows every time I hunt them. Their very commonness makes hunting one or two remarkable individuals an even greater challenge. Whitetails are a democratic animal. Because they live everywhere, every hunter can pursue them, and dream as large as they wish. You can employ whatever hunting method you wish: perching in a treestand or huddling in a ground blind, stalking from the ground or still-hunting in thick timber.

You can be a kid hunting your first season or a grizzled, crippled veteran hunter. You can be chubby or slim, man or woman, a globe-trotting professional hunter or a weekend warrior, and you can hunt whitetails. And not only hunt them, but look for that one remarkable buck that may change your life. As my Milk River buck changed mine.

I want to hear stories of how a single animal changed your perspective of hunting. It doesn’t have to be a monster buck–or maybe it’s about the one that got away–but this is a place to swap stories and get the rest of us frothed up about this fall’s deer hunting seasons.