Want to hunt bigger bucks? Then don’t spring for the latest horn-sprouting food plot mix or celebrity-endorsed nutritional supplement. And... 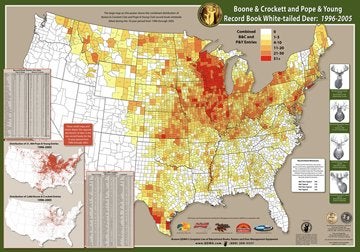 Instead, look at the dirt on your hunting boots. It might be the difference between hunting a 120-inch buck and a 140-class whopper.

It turns out that soil quality is possibly the biggest determinants of antler size in whitetail deer. Have thin, anemic soil? You probably don’t have whopper deer running around. But where you find rich, fertile soils you will also find some of America’s biggest whitetails.

It makes sense if you look at distribution of record-book bucks, compiled by the Quality Deer Management Association. The Midwest, parts of the south, riparian corridors in the West and agricultural land in the East all produce big deer. Of course, these areas also produce bumper crops of corn, soybeans and other ag commodities. These are areas with deep, rich soil.

We all know this intrinsically. But researchers at Mississippi State University have actually crunched the numbers, and they report that bucks of the same age can put on up to 20 inches more antler mass if they grow up in an area with fertile soil. The study looked at 18,000 bucks harvested on 765 properties in Mississippi over the last decade.

Soil types in the study area ranged from the fertile, productive Mississippi Delta to the relatively thin soils of the Lower Coastal Plain to the intermediate quality of the loam soils of the state’s Thin Loess region.

Bucks in the poorest soil, that of the Lower Coastal Plain, took a year longer to reach their antler potential compared to bucks in the Delta. In fact, same-age bucks from the Coastal Plain had nearly 20 inches less mass than those of the Delta region.

The researchers conclude that improved nutrition improves antler size most dramatically in areas with poor soil quality, but they stress that “regardless of age, 60 to 70 percent of bucks will grow antlers similar to the average for that age class,” said a study author. “A small percentage will be smaller than average and an equally small percentage will be larger than average.”

In other words, the bell curve prevails. Remarkable bucks are remarkable because there are so few of them. And in areas with thin, anemic soil, those big bucks are especially remarkable.