Not seeing the whitetail bucks you think are in your area? Maybe tiny blood-sucking ticks are to blame. If you... 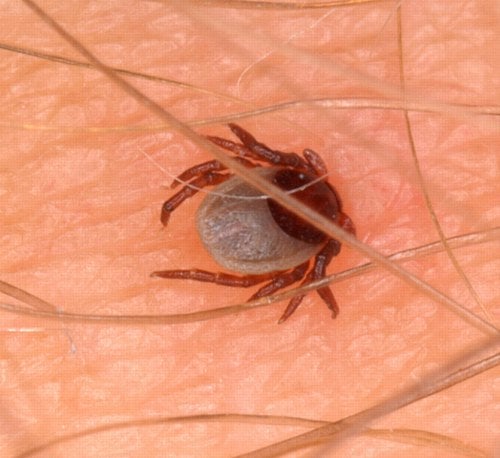 Not seeing the whitetail bucks you think are in your area? Maybe tiny blood-sucking ticks are to blame.

If you accept that reasoning, then it follows that if you can kill the ticks, you can grow bigger bucks.

At least that’s the logic of Dave Forbes, the founder and owner of Hunter’s Specialties. Forbes has spent his career making money by making hunters more successful. He is continuing that pattern in a new direction, by peddling a new product that he claims will grow larger antlers by improving the nutritional health and immune systems of white-tailed deer, which he claims are compromised by a humble antagonist: the common deer tick.

Dave Forbes has the passion of an evangelist, the marketing savvy of an MBA and the attention to detail of an entomologist. So when he claims he has unlocked the secret of growing larger bucks, it makes sense to listen.

And here’s what Forbes told me recently about HS’s new whitetail supplement, Vita-Rack 26.

“When I started turkey hunting in northern Missouri several years ago, I experienced a lot of insects in the woods. Mainly ticks. You learned to spray down a lot, but you’d still have 6 or 7 ticks on you. If you didn’t spray you’d have 20 or more ticks. They were just everywhere.”

But one of the Forbes’ neighbors was (and is) a research chemist, and he mentioned a mineral compound that he was testing seemed to reduce the tick load on deer and other animals.

“We started doing our own testing, and we started harvesting animals with zero ticks on them. None. That really opened our eyes, because if you have killed a deer in northern Missouri over the last decade, the first thing you notice is how full of ticks they are.”

Forbes’ testing became Hunter’s Specialties’ Vita-Rack 26, which is a nutritional supplement for whitetails. Now, you should note that I’m not endorsing this product. I’ve never used it–and I’m unlikely to, as I strongly disagree with the notion of feeding deer, whether cracked corn or medicinal supplements–but I am intrigued by Forbes’ claim that it can control ticks. And not just on deer.

“We have about a dozen different people hunting for two weeks on our farm during turkey season,” says Forbes. “After the second day of not experiencing any ticks, we started looking for them and we found only two ticks. I think that we are reducing the tick load in the entire landscape by controlling them on deer. We are interrupting the life cycle of ticks by reducing them on their primary host – whitetails.”

That’s a remarkable claim, that an ingested substance can effect a change across a whole landscape, and it could even have implications for human health, as deer are one of the biggest transmitters of ticks carrying Lyme disease.

But Forbes goes farther, and claims that bucks that regularly visit the Vita-Rack 26 feeding stations tend to have larger, more robust antlers.

It makes sense. These deer aren’t devoting so much of their energy to fighting the parasites and they can put more of their nutritional potential into body condition and antler growth. Forbes claims that does have heavier, healthier fawns.

I want to have your perspectives on this product, and on Forbes’ claims. Is this “remote application” of vitamins an appropriate management tool? Have we gone too far in our quest to manipulate wildlife? Or is this a magic bullet that could help us reduce pesky, dangerous densities of parasites while also building trophy deer?