I can’t recall the last time I was so excited about sitting in a tree stand. Normally, the notion of... 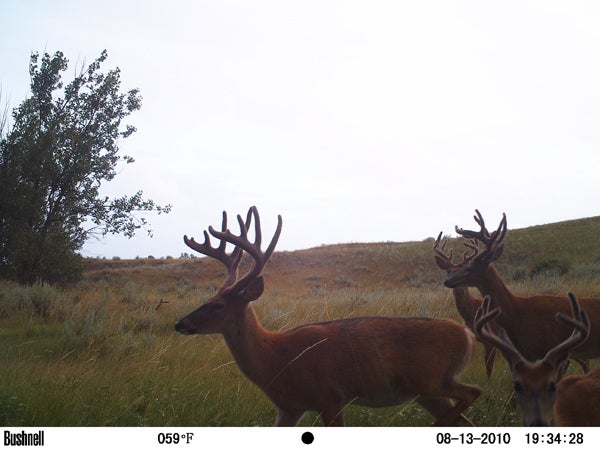 I can’t recall the last time I was so excited about sitting in a tree stand.

Normally, the notion of sitting still for hours at a time bores me so silly that I start to think of alternatives. Like cleaning the basement, or weeding the potatoes. Or sorting sockets in my tool chest.

But a combination of trail cameras, stupendous forage and having property of my own to hunt has made me almost giddy about the arrival of Montana’s archery deer season. It starts a half-hour before sunrise on Saturday, Sept. 4, and I’ll be high up in a cottonwood tree, watching what I expect are some legendary whitetail bucks.

Sept. 4 is not only the opener for hunting season here in Montana, it’s officially the kick-off for Record Quest, Outdoor Life’s most ambitious whitetail season ever.

As you probably know, Record Quest will take me and my fellow OL editors across the country this fall, to places known for legendary whitetails. With luck – plus some well-developed skills – we will encounter trophy bucks. But Record Quest is about more than killing deer. It’s the story of why trophy bucks have such a hold on our collective imagination, and it’s an exploration of tactics and strategies that first-team hunters are using across the country.

I’m a lucky man that Record Quest starts literally in my own back yard. And thanks to trail cameras and some intensive time scouting, my own eyes have been opened to the potential of the Milk River right here where I live. It’s no secret to many of you that I’ve felt the Milk River’s reputation as a big-buck destination has been a little oversold in recent years.

But the images that I’ve been collecting from my Bushnell cameras are changing my mind. I’ve seen at least half a dozen bucks that I would be proud to tag, and many more that are right at the threshold of wall-hanger maturity.

This has been a great year for antler growth. Our spring was cool and rainy, which meant plenty of forage for all wildlife species. But it’s not just groceries. All that vegetation has meant plenty of hiding cover for fawns and for older deer. Now that our grass is curing down, I’m seeing plenty of epic bucks that were hidden from view for much of the spring and summer.

A PLACE OF MY OWN

The other dimension that has me so excited about this season is that it’s the first that I’ll really get to hunt my own property. All my hunting in the Montana portion of Record Quest will be on property along the Milk River and one of its tributaries that I bought last summer. And there’s no better feeling for a farm boy like me than hunting on ground that you own.

So stay tuned. I’ll be bringing you daily reports from the field this week, and I’ll give you a dispatch from the field once the season opens on Saturday morning. Who knows, maybe the Montana portion of Record Quest will be finished in a jiffy. But I doubt it. Because while seeing so many great bucks is a thrill, it’s also a curse because it means I am going to be pretty picky about killing one.