It’s Time to Bash Some Bone

The pre-rut is in full swing, which means this is prime time to be rattling. If you don’t have a... 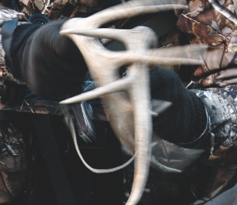 The pre-rut is in full swing, which means this is prime time to be rattling. If you don’t have a rattling bag or synthetic antlers, then find a couple of fresh sheds and put them in your pack. They could be the key that unlocks a great buck over the next two weeks.

But there are almost as many misconceptions and myths about rattling as about any other element of whitetail hunting. I had the good fortune to hunt with Dr. Grant Woods earlier this month, and he dispelled some myths about rattling while soberly reporting that it isn’t always the magic bullet we hope it will be.

You owe it to yourself to visit Dr. Woods’ informative web site (www.growingdeer.tv), where he blogged last week on our time together in Missouri.

*** It Ain’t Magic** – According to a survey that used trained observers to watch how bucks responded to rattling, slightly less than half simply ignored it. They either didn’t hear it or weren’t primed to respond. Of the slight majority that did respond, only slightly more than half of those responded positively, i.e., moved toward the sound. The remainder responded negatively, or moved away from the sound.

*** Morning Is Better** – The same study indicated that bucks respond more positively than rattling in the morning. That could be because the sound travels better in the morning air or because mature deer tend to be slightly less wary and inhibited in the morning compared to the evening.

*** Rattle Loud and Long** – There has been a lot written about the proper volume and frequency of rattling, but Dr. Woods recommends really bashing the antlers, then putting them away. He notes that deer tend to move on average about 200 yards per hour. So you can assume that you’ve “contacted” all the deer within a 200-yard radius with your aggressive rattling. Wait another hour to contact another group of deer moving into your sound horizon.

*** Watch Downwind** – If you have experience rattling, you know it can bring in some bucks on a string. But more often, the older, savvier bucks will come in cautiously. Keep a close eye on your downwind side for bucks that are curious about your rattling, but sensible enough to check it out from their vantage point. Glass downwind cover and you may find a whopper buck eyeing you right back.

Do you have any wisdom to share about rattling? This is the place, and it’s absolutely the right time.