Power Scouting in the Catskills

This Record Quest entry is going to be quite a bit different than most of the other posts on the... 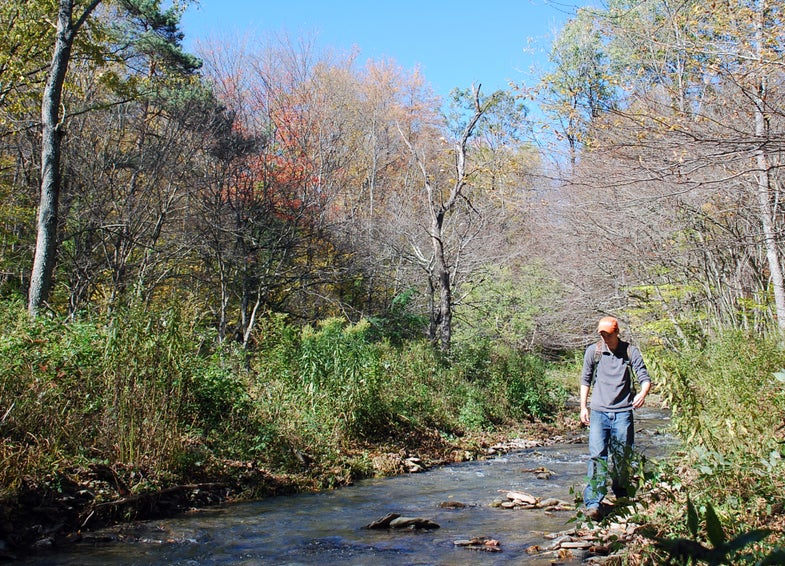 This Record Quest entry is going to be quite a bit different than most of the other posts on the blog — mostly because I’m working against the odds and the clock.

I signed an apartment lease in Brooklyn, New York in September. With all the business that comes with moving halfway across the country, I’ve had very little time to scout in my new home state. Not to mention, New York City isn’t exactly a welcoming place for deer hunters. Just the process for earning a gun permit in the city takes months, so I’ll be restricted to archery tackle only this fall.

The lone bright spot in my inaugural Empire State deer season happened last weekend, when I managed to escape the city to do some power scouting on public land in the Catskill Mountains. It was now or never; bowhunting season in New York opens Oct. 16.

If you’ve never tried to drive out of NYC, well, it’s about as bad as it sounds. Think honking horns, angry cab drivers, potholes and tolls. But soon the skyscrapers changed to mountains and the stoplights turned to burning red oaks and maples. As I fled north, my heart rate steadied, the vein in my neck stopped pulsating and I began to feel like a human being again.

Being a Wisconsin native, finding whitetails in the mountains was a new and exciting experience. And after spending a day driving, hiking and glassing like a madman, I found at least three solid stand sites.

With that said, I’m a realist. I don’t expect to kill the world record buck on a stretch of public land in New York – the state record is 198 2/8 and the world record Hanson buck scores 213 5/8. But I am pretty excited about the upcoming weeks. And after all, the great thing about deer hunting is that you just never know what might walk past your stand.

Here’s a rundown of the three spots I scouted. Which one would you hunt on opening day?
**
The River Bottom Crossroads**

I was driving a dirt road with two tall ridges on each side when I came across a stand of pines that cut through a big hardwood forest. I always like hunting along changes in habitat, so I got out and followed a deer trail through the pines until I hit a small streambed at the very bottom of a valley. Running parallel to the stream was another heavily used deer trail that meandered up to a slashing. The deer were feeding on new growth in this area and many of the small saplings had their tops nipped off. There was also another trail that ran across the stream up the other ridge. It was a good-looking deer intersection.

Just hoping to get a better view of the valley, I climbed up a logging road that brought me toward the top of a ridge. What I found was a large logged-out clearing (about a quarter mile long). The trail I was on skirted the clearing so I kept climbing, and the trail kept narrowing. Pretty soon I found deer sign and it was obvious the deer were walking the trail to feed in the clearing. Deer are sort of like people, they’ll typically take the path of least resistance as long as it seems safe. I didn’t find any old rubs in the area, but there were a lot of tracks on the trail.

The Apple Tree Field
The sun was starting to dip over the western ridge, and I grudgingly pointed my car back to the city thinking that my romp in the mountains was over. But then I spotted a big clearing through a stand of hardwoods and I slammed on the brakes. Curiosity got the best of me and I’m glad it did, because when I followed a trail leading out to the clearing, I found a large grass field that was dotted with pines and apple trees. It looked like one of those spots you see in hunting shows on Saturday morning. Many of the apple trees were badly abused, not only stripped of their apples, but also their low-hanging limbs. In fading light I quickly prowled the edge of the field until I found the trail deer were using to enter the field.

I followed that for a few hundred yards and it led through thick cover to a small pond and then higher up the ridge. On my walk back to the field I found two old rubs, and I started fantasizing about drawing back on the world record buck (folks will call him the Robinson Buck) as he makes his way out to the field for an apple breakfast.

The problem with this spot is that it’s not far from a public dirt road, and I’m worried that there are going to be three different guys trying to hunt it on opening morning. The other question: how long will the apples hold out?

Alright Record Quest Nation, if you were me, what stand would you hunt the first morning of bow season?