I’m headed up to my camp in New England tonight with the first hard-freeze warning in the forecast for tonight... 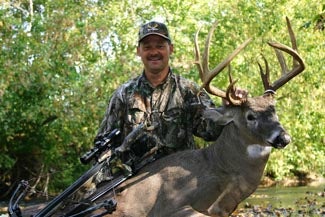 Here's Rick Bednar's Clear Creek buck from a couple of seasons ago.
SHARE

I’m headed up to my camp in New England tonight with the first hard-freeze warning in the forecast for tonight and tomorrow. Bow season just kicked off and the time for sleep deprivation has arrived. Although the plan is to head to a stand at first light, my pump is even more primed for what lies ahead come Monday morning.

While Andrew McKean continues to chase down elk out west, I’ll be standing in on Record Quest and am headed for Lancaster, Ohio for a crossbow hunt with Todd Frank of Clear Creek Outfitters. There, I’ll be joined by Rick Bednar of Ten Point Crossbows for what I hope will be an outstanding hunt for some outsized bucks.

This will also be my inaugural crossbow hunt. I’ve been intrigued by them for several years–ever since Rick put one in my hands, gave me a quick tutorial on how to draw, aim and shoot and then let me at ’em. ‘Holy Crap’ is the only way to describe the experience and I’ve been itching to go deer hunting with one ever since. So here’s my chance.

The good folks at Ten Point were kind enough to ship me a practice bow back in April–a Turbo XLT–and I’ve been hammering my deer target regularly. I cannot wait for Monday!

I’ll be posting blogs, galleries and videos all week long to report on the hunt right here on Record Quest.