As you can see on our weekly Deer Forecast the weather may influence your hunting success even more than the... 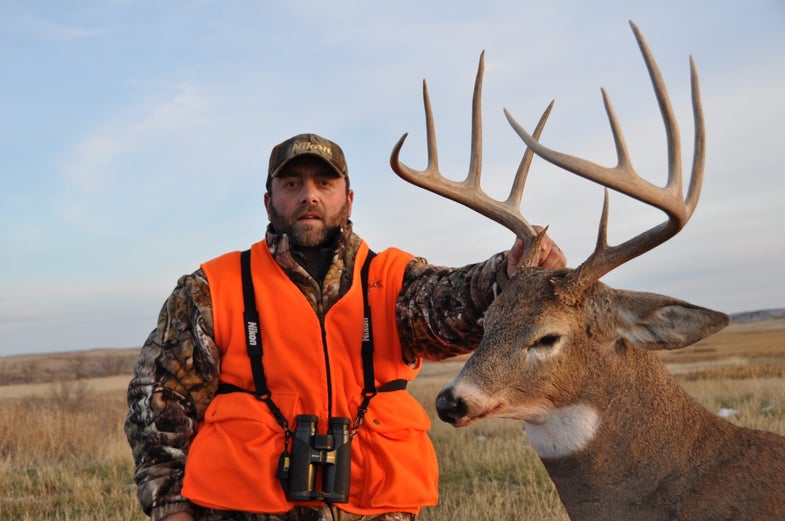 As you can see on our weekly Deer Forecast the weather may influence your hunting success even more than the rut timing or your work schedule.

I had an interesting week, with temperatures as low as 16, driving snow, and balmy bluebird days in the high 60s, all within a 4-day span.

It was the same weather system that hovered over my buddy Jon LaCorte, hunting the Yellowstone River just southeast of me. But he made better use of the thermal schizophrenia than I did.

“The weather ranged from rain and snow with 25mph winds to cold and clear,” says Jon, who had seen this buck from his elevated box blind a few evenings prior to pulling the trigger. But then the cold front blew threw and deer hunkered down in cover. The fields were pretty much desolate.

“But as soon as the weather broke and the temperature dropped, the deer were on their feet. We were watching an alfalfa field when he came out along with another smaller buck.”

LaCorte put down the buck at 154 yards with his Remington .300 RUM.

I was looking for this guy’s brother, or uncle, or granddad, along the Milk River. But while the weather definitely suppressed deer movement in the teeth of the storm, and got them moving again when the wind quit and the mercury dropped, I didn’t see the mature bucks. Instead, I saw every doe and fawn and forkhorn in the valley, gorging on the still-green alfalfa.

The better bucks did just what they’ve been doing since early September, coming out to feed right at the end of legal shooting light. I’m hoping that from here on, the food will continue to be the doe magnet, and that the rut will slowly erode the inhibitions of those larger bucks.

There’s not much time to waste. Daylight Savings Time returns on Nov. 7, which means that shooting light ends even earlier in the day. And that matters for those of us with hectic work schedules.